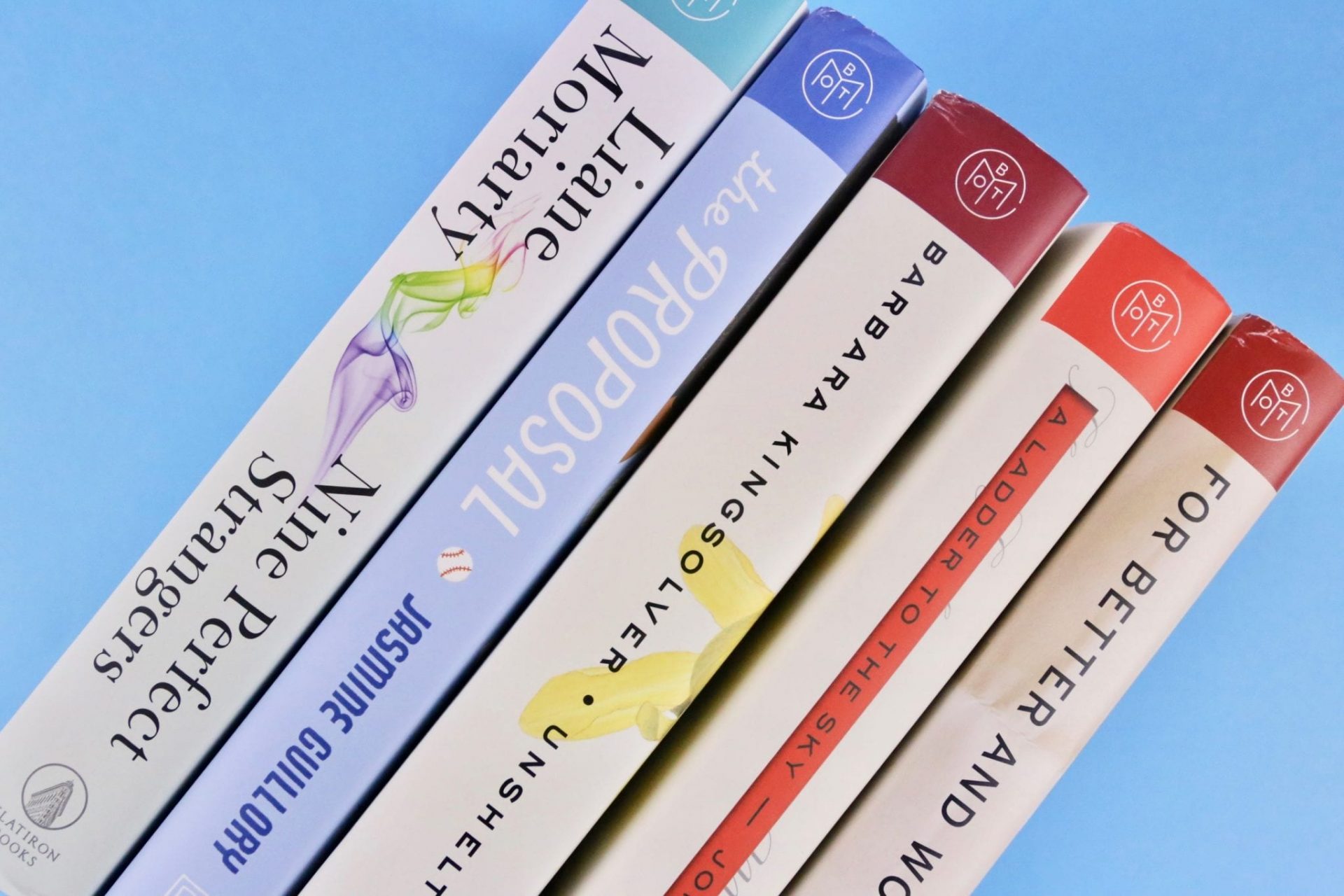 Every month Book of the Month releases 5 new books of which subscribers can choose to receive. This month we had the chance to look at all 5 of the books from the November collection. And……I don’t know about you, but I consider November and December to be the best reading months of the year, so I was particularly excited about this month’s book delivery. I’ve got the fire going and my cozy blanket waiting for me on the couch. 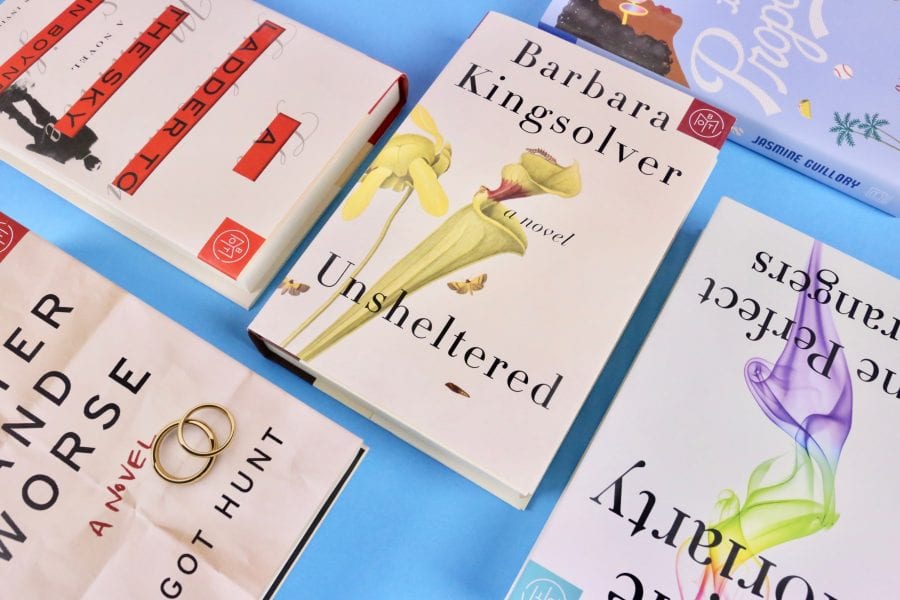 Here’s a closer look at the November Book of the Month selections….. 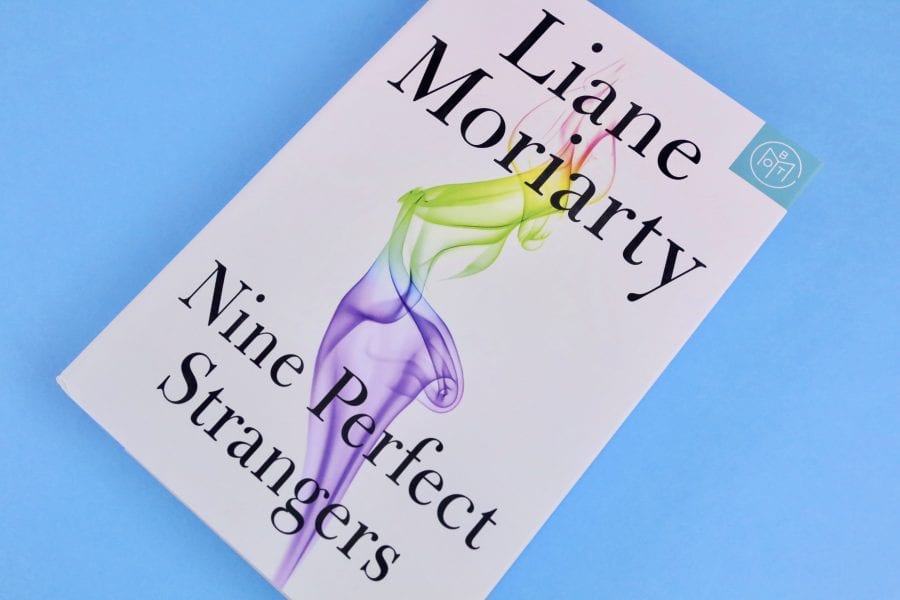 Could ten days at a health resort really change you forever? In Liane Moriarty’s latest page-turner, nine perfect strangers are about to find out…

Nine people gather at a remote health resort. Some are here to lose weight, some are here to get a reboot on life, some are here for reasons they can’t even admit to themselves. Amidst all of the luxury and pampering, the mindfulness and meditation, they know these ten days might involve some real work. But none of them could imagine just how challenging the next ten days are going to be.

Frances Welty, the formerly best-selling romantic novelist, arrives at Tranquillum House nursing a bad back, a broken heart, and an exquisitely painful paper cut. She’s immediately intrigued by her fellow guests. Most of them don’t look to be in need of a health resort at all. But the person that intrigues her most is the strange and charismatic owner/director of Tranquillum House. Could this person really have the answers Frances didn’t even know she was seeking? Should Frances put aside her doubts and immerse herself in everything Tranquillum House has to offer – or should she run while she still can?

It’s not long before every guest at Tranquillum House is asking exactly the same question.

Combining all of the hallmarks that have made her writing a go-to for anyone looking for wickedly smart, page-turning fiction that will make you laugh and gasp, Liane Moriarty’s Nine Perfect Strangers once again shows why she is a master of her craft. 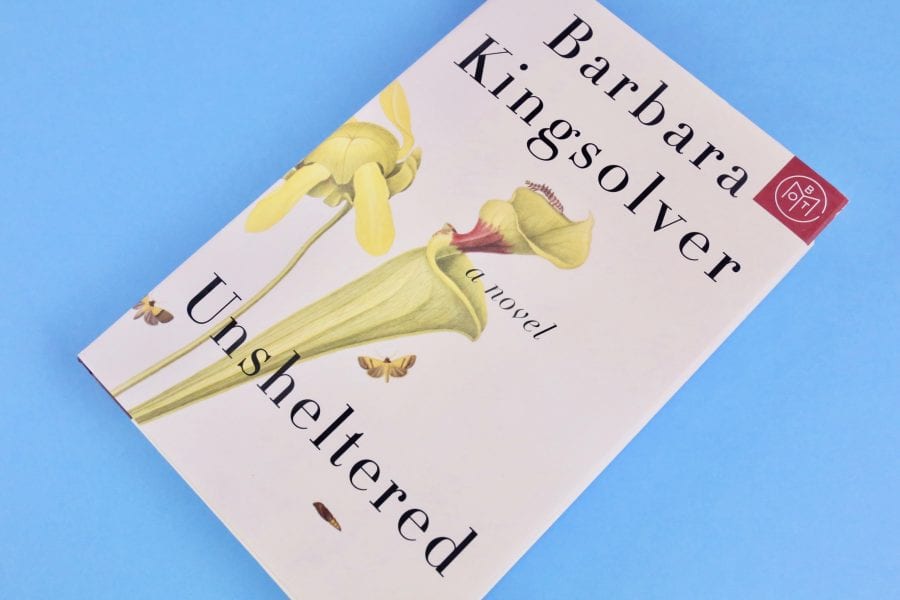 BOTM Quick take: A sweeping tale of two families coping with turbulent times, from the author of The Poisonwood Bible.

The New York Times bestselling author of Flight Behavior, The Lacuna, and The Poisonwood Bible and recipient of numerous literary awards—including the National Humanities Medal, the Dayton Literary Peace Prize, and the Orange Prize—returns with a timely novel that interweaves past and present to explore the human capacity for resiliency and compassion in times of great upheaval.

Willa Knox has always prided herself on being the embodiment of responsibility for her family. Which is why it’s so unnerving that she’s arrived at middle age with nothing to show for her hard work and dedication but a stack of unpaid bills and an inherited brick home in Vineland, New Jersey, that is literally falling apart. The magazine where she worked has folded, and the college where her husband had tenure has closed. The dilapidated house is also home to her ailing and cantankerous Greek father-in-law and her two grown children: her stubborn, free-spirited daughter, Tig, and her dutiful debt-ridden, ivy educated son, Zeke, who has arrived with his unplanned baby in the wake of a life-shattering development.

In an act of desperation, Willa begins to investigate the history of her home, hoping that the local historical preservation society might take an interest and provide funding for its direly needed repairs. Through her research into Vineland’s past and its creation as a Utopian community, she discovers a kindred spirit from the 1880s, Thatcher Greenwood.

A science teacher with a lifelong passion for honest investigation, Thatcher finds himself under siege in his community for telling the truth: his employer forbids him to speak of the exciting new theory recently published by Charles Darwin. Thatcher’s friendships with a brilliant woman scientist and a renegade newspaper editor draw him into a vendetta with the town’s most powerful men. At home, his new wife and status-conscious mother-in-law bristle at the risk of scandal, and dismiss his financial worries and the news that their elegant house is structurally unsound.

Brilliantly executed and compulsively listenable, Unsheltered is the story of two families, in two centuries, who live at the corner of Sixth and Plum, as they navigate the challenges of surviving a world in the throes of major cultural shifts. In this mesmerizing story told in alternating chapters, Willa and Thatcher come to realize that though the future is uncertain, even unnerving, shelter can be found in the bonds of kindred—whether family or friends—and in the strength of the human spirit. 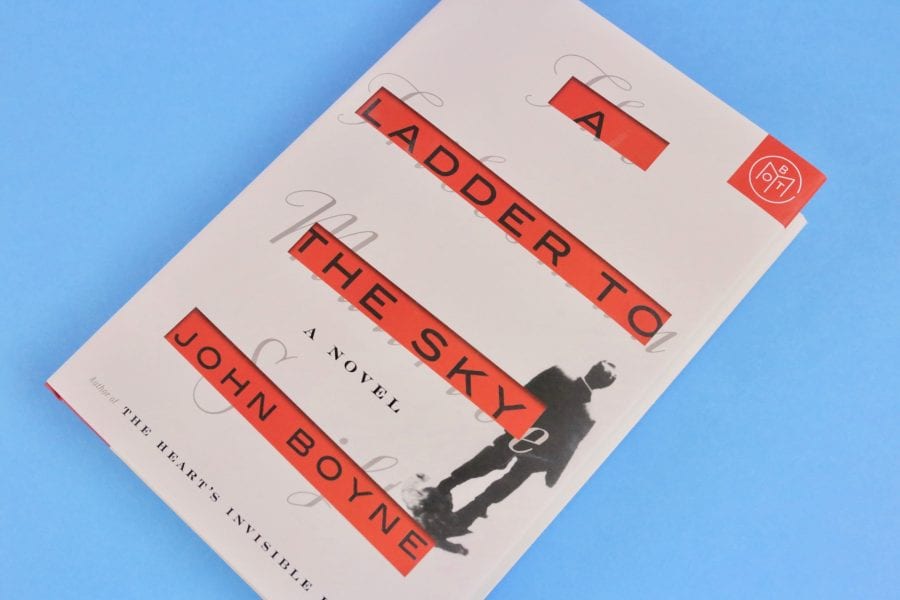 A Ladder to the Sky by John Boyne

BOTM Quick take: From our 2017 Book of the Year winner, a literary drama about a young writer willing to do anything to attain his place among the greats.

Maurice Swift is handsome, charming, and hungry for success. The one thing he doesn’t have is talent – but he’s not about to let a detail like that stand in his way. After all, a would-be writer can find stories anywhere. They don’t need to be his own.

Working as a waiter in a West Berlin hotel in 1988, Maurice engineers the perfect opportunity: a chance encounter with celebrated novelist Erich Ackermann. He quickly ingratiates himself with the powerful – but desperately lonely – older man, teasing out of Erich a terrible, long-held secret about his activities during the war. Perfect material for Maurice’s first novel.

Once Maurice has had a taste of literary fame, he knows he can stop at nothing in pursuit of that high. Moving from the Amalfi Coast, where he matches wits with Gore Vidal, to Manhattan and London, Maurice hones his talent for deceit and manipulation, preying on the talented and vulnerable in his cold-blooded climb to the top. But the higher he climbs, the further he has to fall… 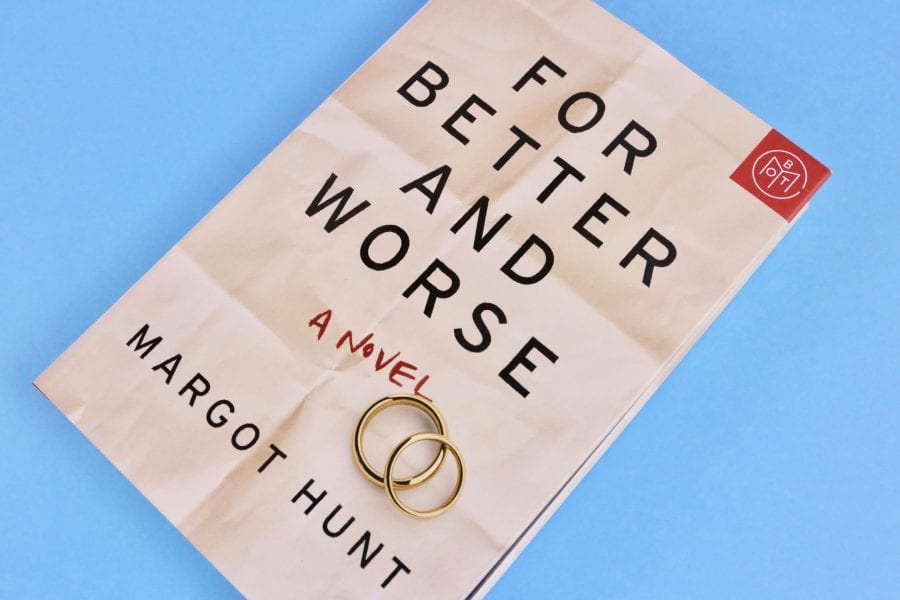 For Better and Worse by Margot Hunt

BOTM Quick take: How to get away with murder … husband and wife edition.

When they fell in love back in law school, Natalie and Will Clarke joked that they were so brilliant, together they could plan the perfect murder. After fifteen rocky years of marriage, they had better hope they’re right.

Their young son Jacob’s principal is accused of molesting a troubled student. It’s a horrifying situation—and the poison spreads rapidly. One night before bed, Jacob tells Natalie he is a victim, too. In that moment, her concept of justice changes forever. Natalie decides the predator must die.

To shelter Jacob from the trauma of a trial, Natalie concocts an elaborate murder plot and Will becomes her unwilling partner. The Clarkes are about to find out what happens when your life partner becomes your accomplice—and your alibi. 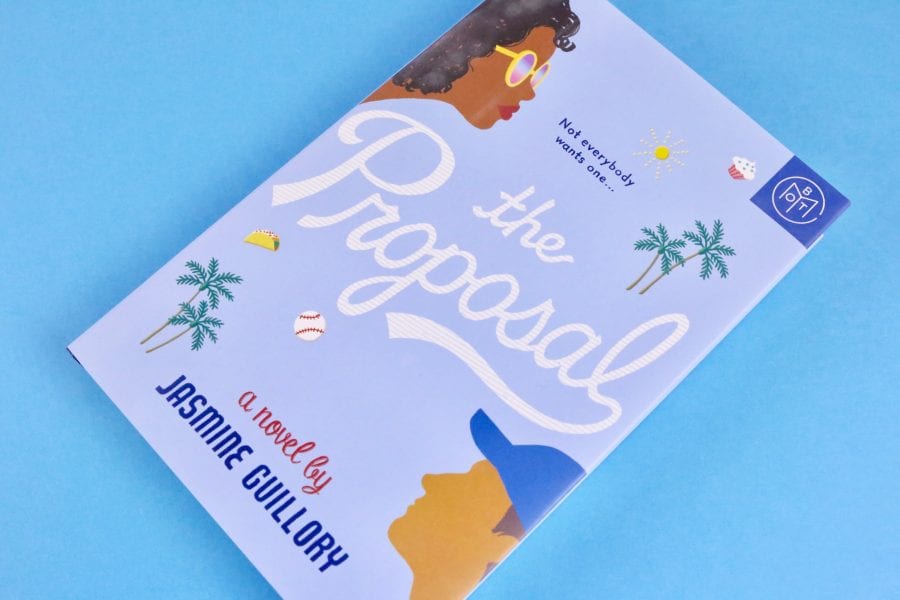 The Proposal by Jasmine Guillory

BOTM Quick take: A no-strings-attached fling threatens to turn serious in this clever romp that begins where most rom-coms end—with a proposal.

When freelance writer Nikole Paterson goes to a Dodgers game with her actor boyfriend, his man bun, and his bros, the last thing she expects is a scoreboard proposal. Saying no isn’t the hard part–they’ve only been dating for five months, and he can’t even spell her name correctly. The hard part is having to face a stadium full of disappointed fans…

At the game with his sister, Carlos Ibarra comes to Nik’s rescue and rushes her away from a camera crew. He’s even there for her when the video goes viral and Nik’s social media blows up–in a bad way. Nik knows that in the wilds of LA, a handsome doctor like Carlos can’t be looking for anything serious, so she embarks on an epic rebound with him, filled with food, fun, and fantastic sex. But when their glorified hookups start breaking the rules, one of them has to be smart enough to put on the brakes… 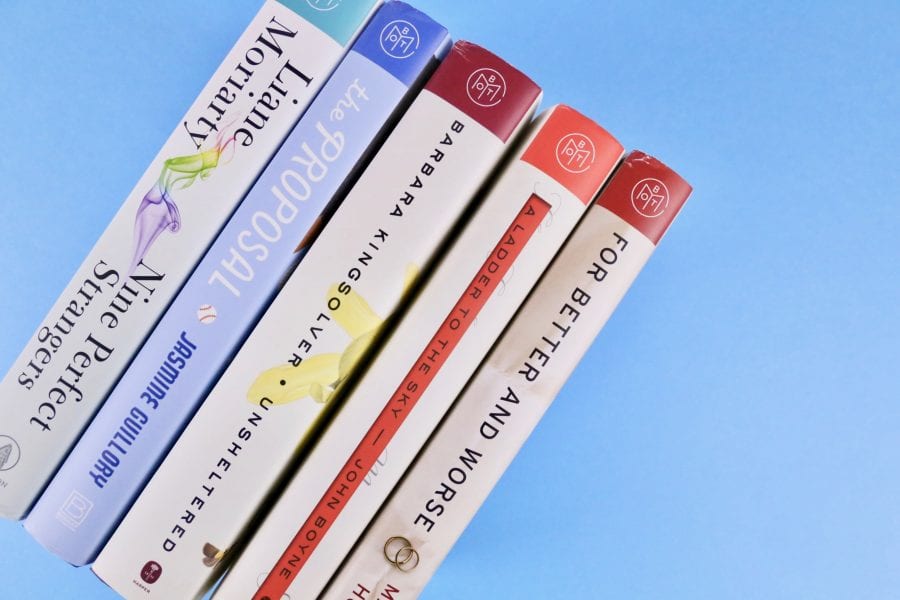 The November Book of the Month selections have offered us a nice mixture of reads. My choice for the month was For Better and Worse by Margot Hunt because I have a hard time passing up a good mystery or thriller. I’m about 3/4 of the way through the book and it’s not as exciting as I thought it would be, but it’s still a good read. If I were to compare it to my choices from the last few months it would definitely come in towards the bottom of the list. But, with that being said, I’m not even halfway through the book, and who knows, it just might end up surprising me and becoming a new fave. Overall, I’m not as excited about the November selections as I have been with past selections. I’m crossing my fingers that we see some exciting thrillers or winter-themed books for December. I get so darn excited when the new selections come out each month on the 1st. December can’t come soon enough.