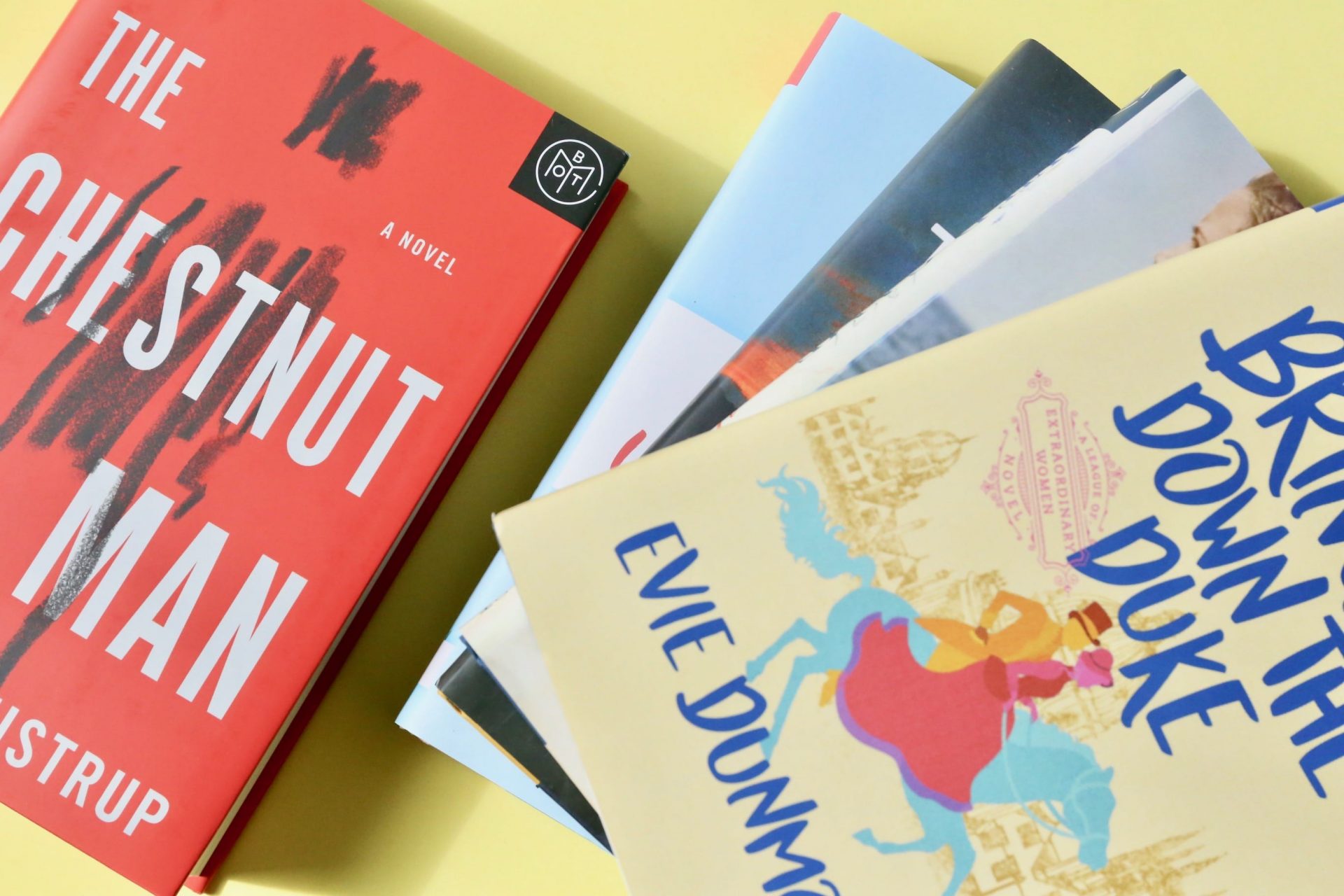 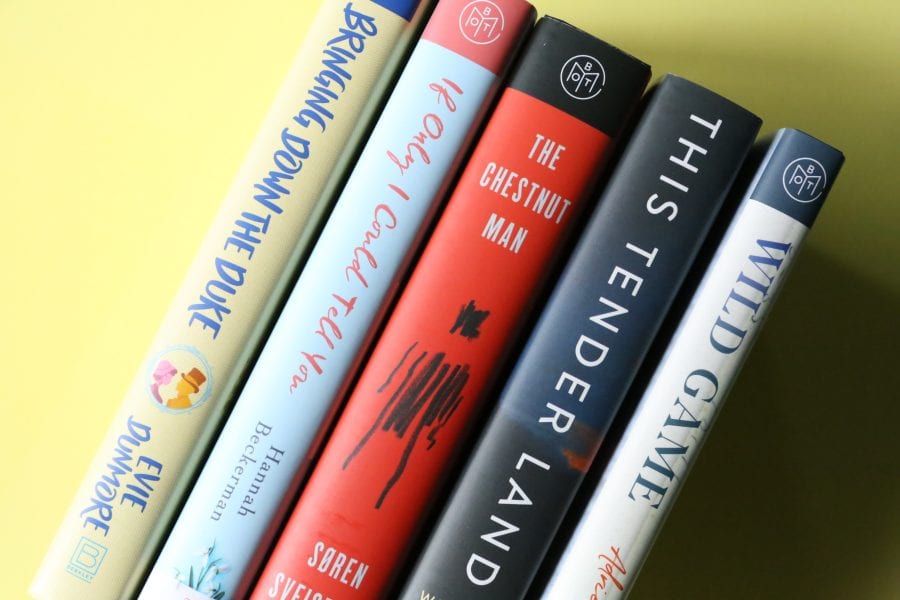 I try to think of my life before I discovered Book of the Month and it seems so long ago. It also seems kind of boring because before discovering this book subscription box I wasn’t reading at all. I credit BOTM for reigniting my love for books. I truly look forward to my box arriving each month and I also look forward to my daily/weekly reading ritual. Sometimes it is early morning, when the house is quiet, curled up in my favourite chair, and sometimes it’s during the day when I need a break from work. Either way I LOVE my reading time and I LOVE Book of the Month! 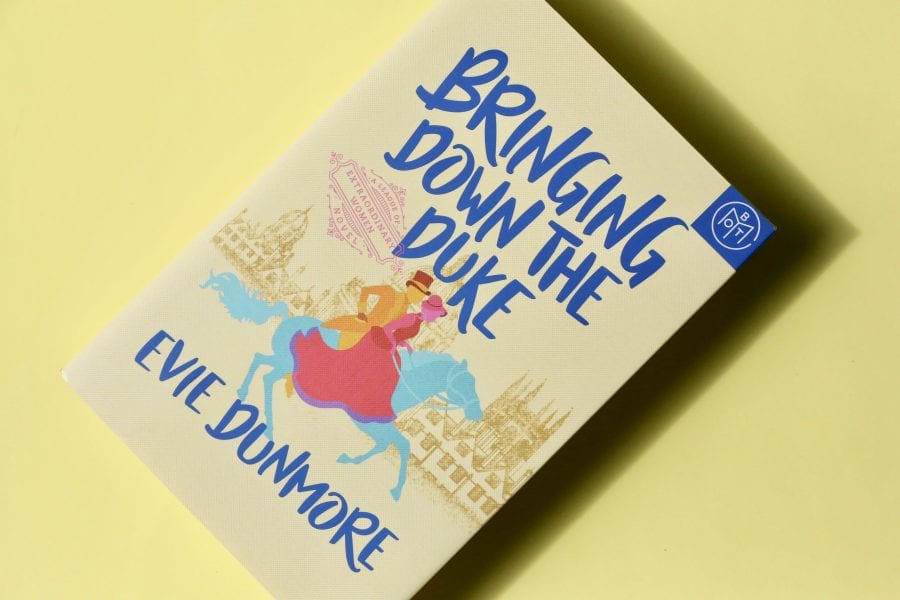 Bringing Down the Duke by Evie Dunmore

England, 1879. Annabelle Archer, the brilliant but destitute daughter of a country vicar, has earned herself a place among the first cohort of female students at the renowned University of Oxford. In return for her scholarship, she must support the rising women’s suffrage movement. Her charge: recruit men of influence to champion their cause. Her target: Sebastian Devereux, the cold and calculating Duke of Montgomery who steers Britain’s politics at the Queen’s command. Her challenge: not to give in to the powerful attraction she can’t deny for the man who opposes everything she stands for.

Sebastian is appalled to find a suffragist squad has infiltrated his ducal home, but the real threat is his impossible feelings for green-eyed beauty Annabelle. He is looking for a wife of equal standing to secure the legacy he has worked so hard to rebuild, not an outspoken commoner who could never be his duchess. But he wouldn’t be the greatest strategist of the Kingdom if he couldn’t claim this alluring bluestocking without the promise of a ring…or could he?

Locked in a battle with rising passion and a will matching her own, Annabelle will learn just what it takes to topple a duke…. 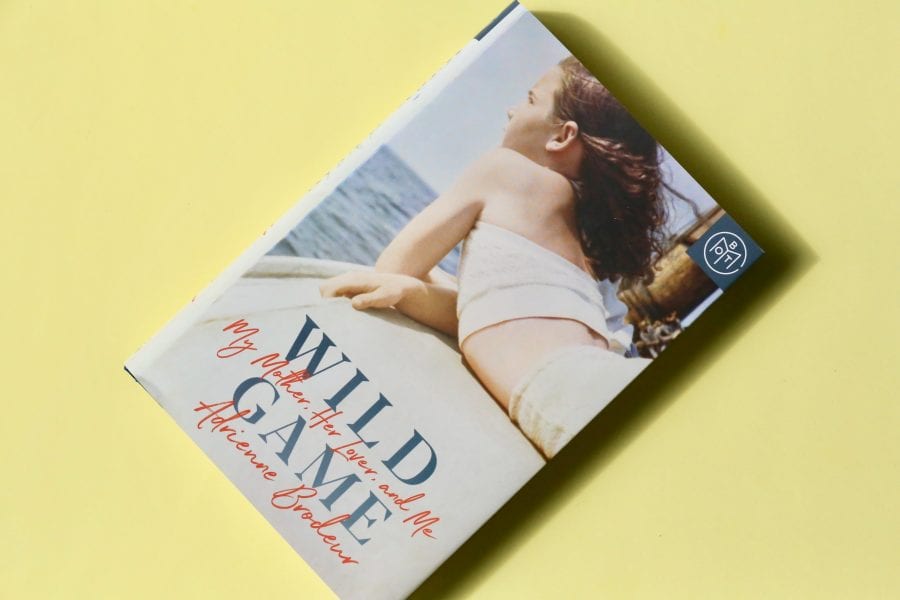 On a hot July night on Cape Cod when Adrienne was fourteen, her mother, Malabar, woke her at midnight with five simple words that would set the course of both of their lives for years to come: Ben Souther just kissed me.

Adrienne instantly became her mother’s confidante and helpmate, blossoming in the sudden light of her attention, and from then on, Malabar came to rely on her daughter to help orchestrate what would become an epic affair with her husband’s closest friend. The affair would have calamitous consequences for everyone involved, impacting Adrienne’s life in profound ways, driving her into a precarious marriage of her own, and then into a deep depression. Only years later will she find the strength to embrace her life—and her mother—on her own terms.

Wild Game is a brilliant, timeless memoir about how the people close to us can break our hearts simply because they have access to them, and the lies we tell in order to justify the choices we make. It’s a remarkable story of resilience, a reminder that we need not be the parents our parents were to us. 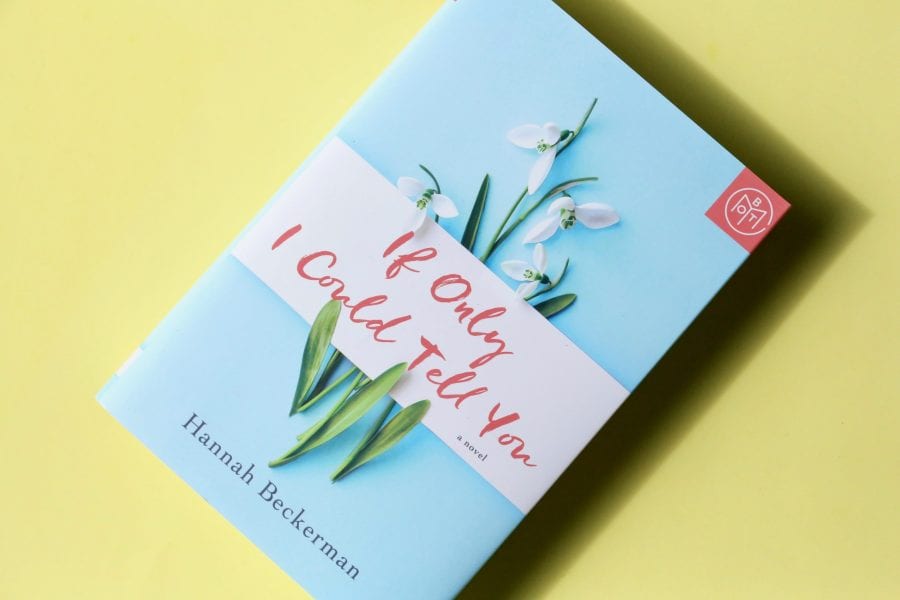 If Only I Could Tell You by Hannah Beckerman

Audrey’s family has fallen apart. Her two grown-up daughters, Jess and Lily, are estranged, and her two teenage granddaughters have never been allowed to meet. A secret that echoes back thirty years has splintered the family in two, but is also the one thing keeping them connected.

As tensions reach breaking point, the irrevocable choice that one of them made all those years ago is about to surface. After years of secrets and silence, how can one broken family find their way back to each other? 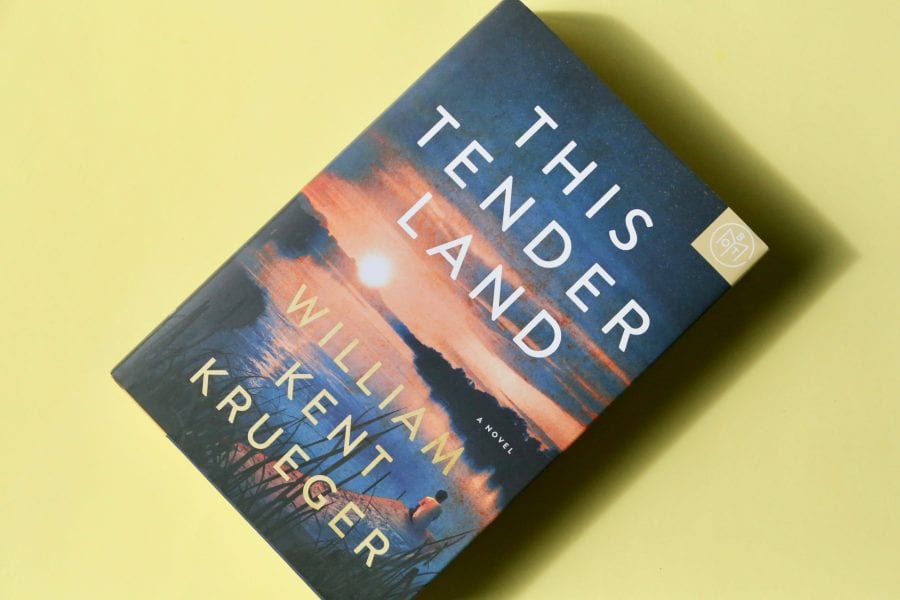 For fans of Before We Were Yours and Where the Crawdads Sing, a magnificent novel about four orphans on a life-changing odyssey during the Great Depression, from the New York Timesbestselling author of Ordinary Grace.

1932, Minnesota—the Lincoln School is a pitiless place where hundreds of Native American children, forcibly separated from their parents, are sent to be educated. It is also home to an orphan named Odie O’Banion, a lively boy whose exploits earn him the superintendent’s wrath. Forced to flee, he and his brother Albert, their best friend Mose, and a brokenhearted little girl named Emmy steal away in a canoe, heading for the mighty Mississippi and a place to call their own.

Over the course of one unforgettable summer, these four orphans will journey into the unknown and cross paths with others who are adrift, from struggling farmers and traveling faith healers to displaced families and lost souls of all kinds. With the feel of a modern classic, This Tender Land is an en­thralling, big-hearted epic that shows how the magnificent American landscape connects us all, haunts our dreams, and makes us whole. 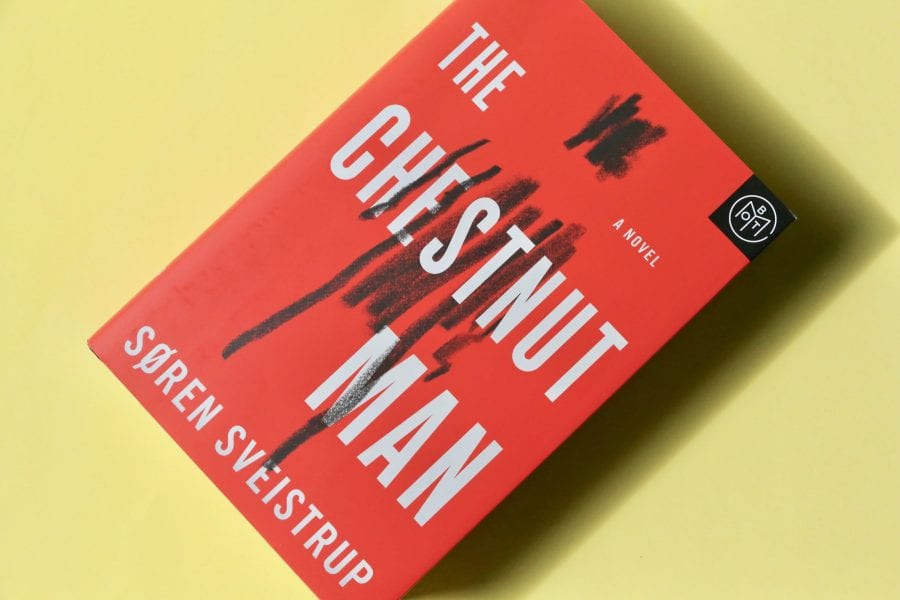 The Chestnut Man by Søren Sveistrup

The heart-pounding debut from the creator of the hit Scandinavian television show The Killing.

If you find one, he’s already found you.

A psychopath is terrorizing Copenhagen.

His calling card is a “chestnut man”—a handmade doll made of matchsticks and two chestnuts—which he leaves at each bloody crime scene.

Examining the dolls, forensics makes a shocking discovery—a fingerprint belonging to a young girl, a government minister’s daughter who had been kidnapped and murdered a year ago.

A tragic coincidence—or something more twisted?

To save innocent lives, a pair of detectives must put aside their differences to piece together the Chestnut Man’s gruesome clues.

Because it’s clear that the madman is on a mission that is far from over.

And no one is safe. 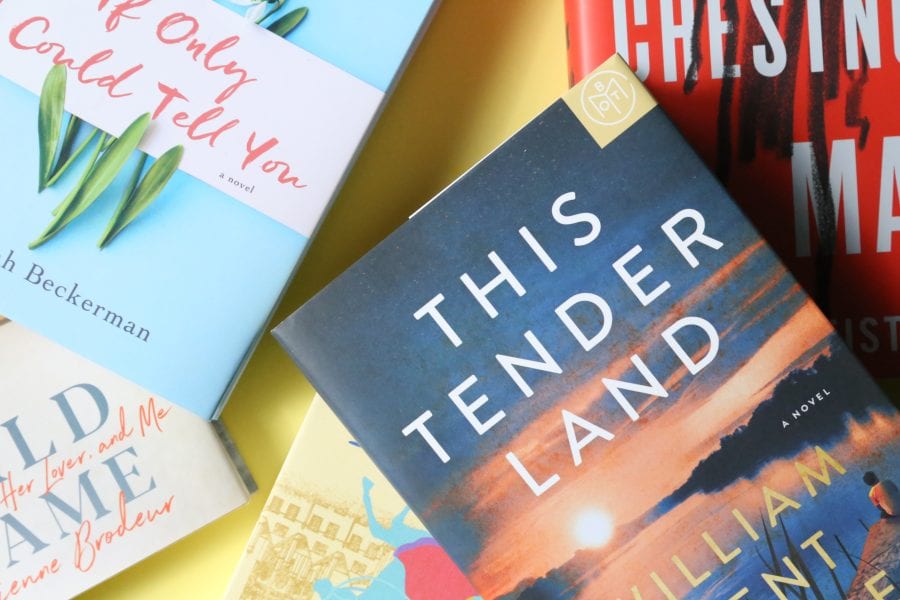 The September Book of the Month selections got me thinking. None of the choices jumped out at me this month. Typically I will spot one (or two) right away that I must read, but this month was a little different. I had to spend a little more time than usual to go through each book, get familiar with the story lines, read the reviews, etc….. In the end I decided to go with The Chestnut Man by Søren Sveistrup, which should have been the obvious choice from the beginning since it falls under the thriller genre. I’m usually always drawn to those book choices, but there was something about this one that I wasn’t overly excited about. But…..then I read the reviews, which were amazing by the way, and found out the author is also the scriptwriter of the Danish television phenomenon The Killing which won various international awards and just happened to be a show I couldn’t stop watching so I figured I had to give the book a go. Hoping to get started on it early tomorrow morning…..