Book of the Month Selections January 2017 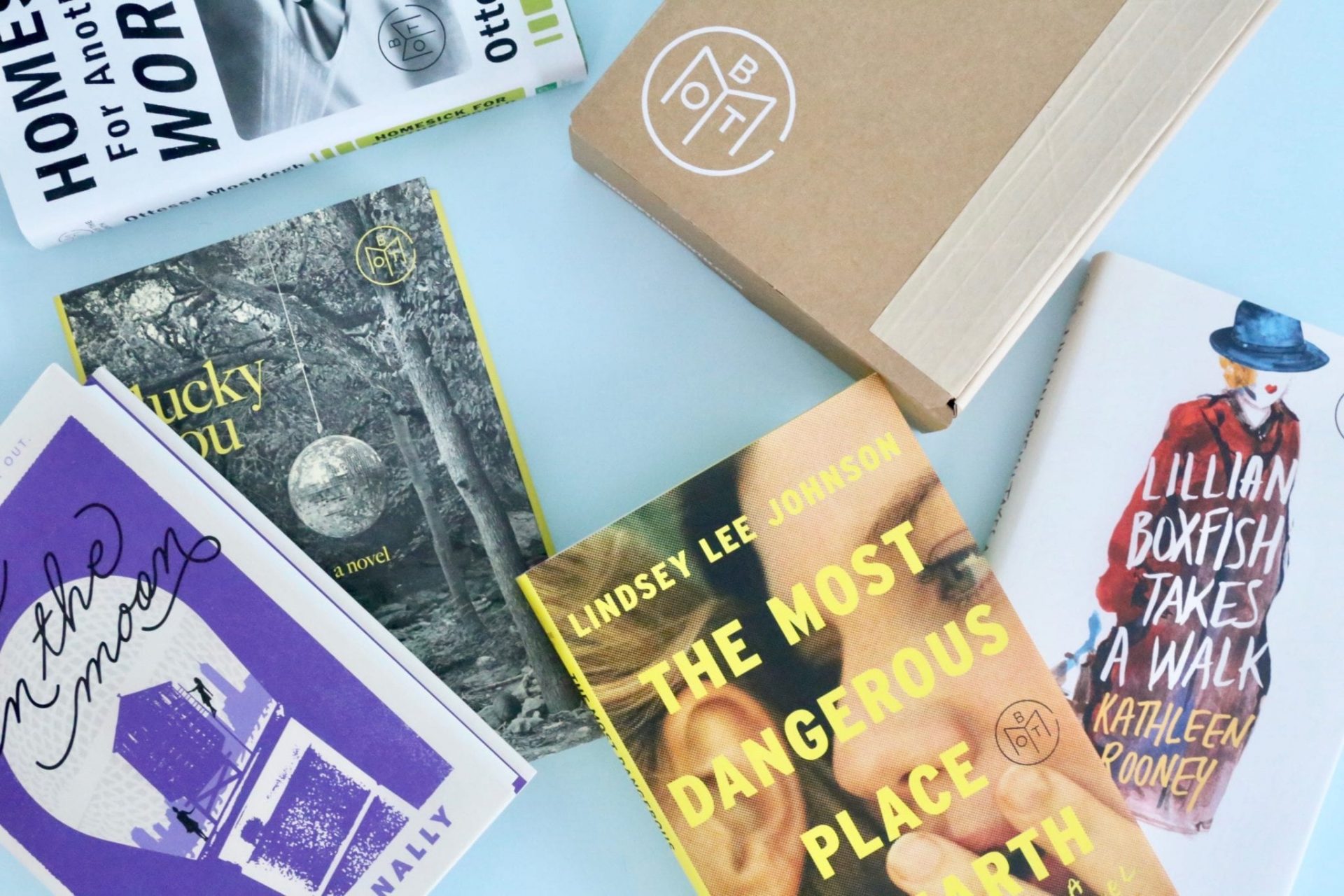 Book of the Month it is a monthly book subscription box. Every month they release 5 new books which have been selected by their panel of Judges. Books are announced on the first of the month, and members have six days to decide which book they would like to receive. Monthly subscriptions include one book, but members can purchase up to two additional books each month for $9.99 per title. They kindly sent me the January selections to review. 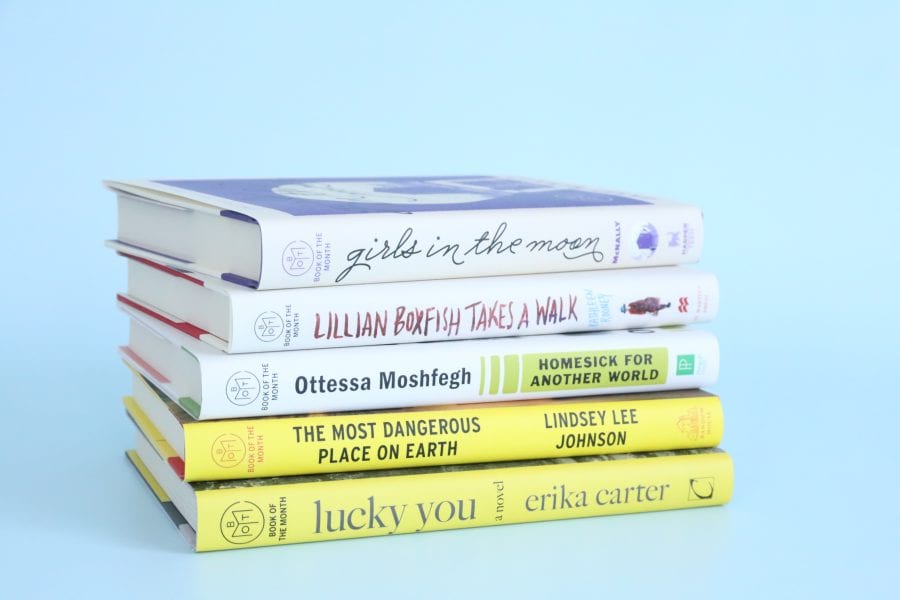 Today we are looking at the January Book of the Month selections and I feel like a little kid on Christmas morning. I get so excited when this box shows up on my doorstep. If you read the most recent BOTM review you will know that I was absolutely thrilled with the December selections. I honestly think it was their best selection yet. I can’t wait to see what they came up with this month…. 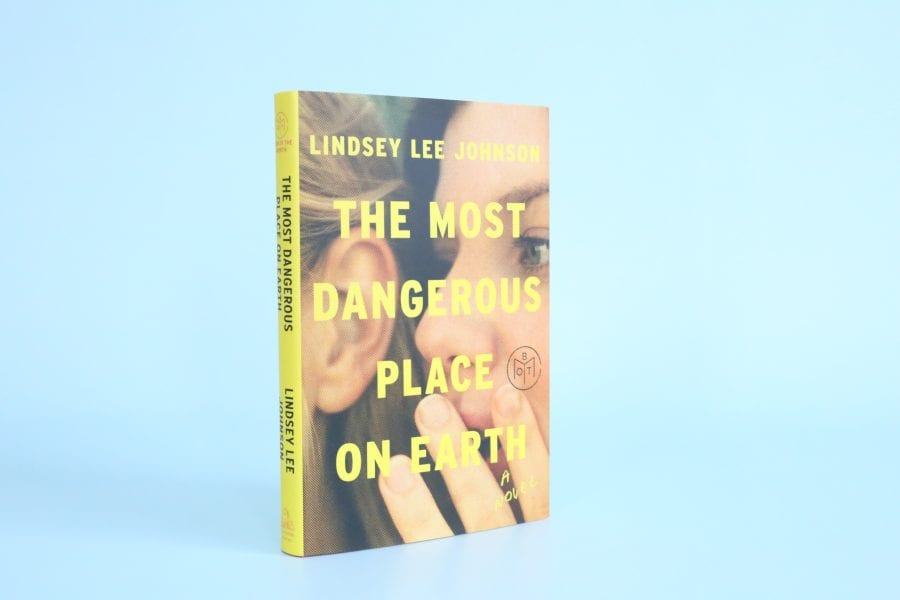 The Most Dangerous Place on Earth by Lindsey Lee Johnson

The mysteries of adolescence are catnip for writers. Generation after generation, we try to figure out why teenagers behave the way they do, why they seem so elusive, and why their worlds are so alluring. Love affairs and friendships form fast and dissolve in disaster, the smallest cruelties can be devastating, and decisions, no matter how trivial, become the most important choices in their lives. Authors who inhabit the adolescent world best understand how teens must come to terms with power, and zero in on those who are not afraid to use it.

The intersection of power, fear, desire, and pain is what makes Lindsey Lee Johnson’s debut novel The Most Dangerous Place on Earth so extraordinary. An assortment of students attending a Marin County, California high school – where one might expect an idyllic state bordering on pleasant boredom – can’t quite shake off the effect of a years-ago tragedy where unrequited love, an ill-advised letter, and social media bullying led to suicide.

Each of these students carry the burden of tragedy in unexpected ways, trying on and shedding identities like snakeskin. They include Cally, the original object of desire who transforms from proto-cool to waifish hippie, wanting visibility and invisibility at the same time; Nick, one of the original bullies, who projects a tough persona with his friends but has secret outlets and liaisons; and Emma, a talented dancer so disciplined by day it comes as no surprise that she tests her self-destructive limits by night. 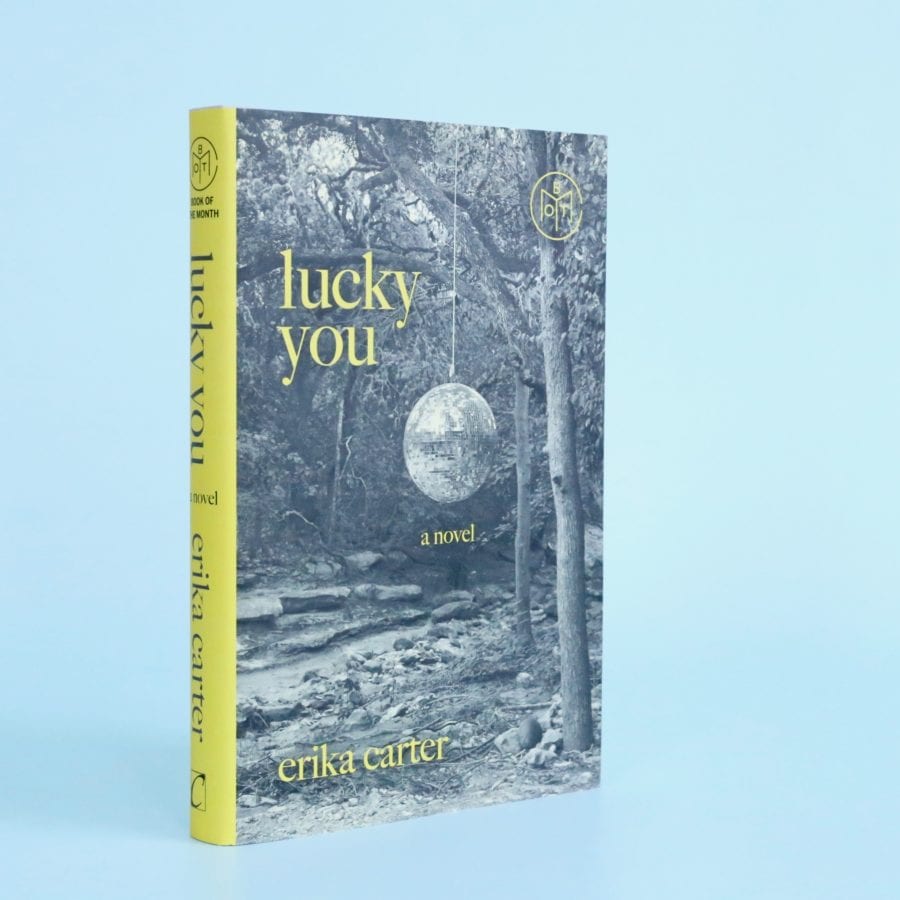 Lucky You by Erika Carter

Three waitresses at the same dead-end bar in an Arkansas college town try to navigate their fuzzed-out early twenties. Ellie, Rachel, and Chloe all yearn for meaning in different ways, and yet they all converge on a very relatable – and very modern – sense that, even though we’re supposed to feel more connected than ever, young people can still feel adrift in today’s world.

At the beginning of Lucky You, we see our heroines trying to numb themselves with late nights of boozing, sex with strangers, and bad reality television. They seek out meaningful connection but often end up in dysfunctional relationships, and so they feel lost – unsure about what to believe in or where to focus their energies.

And so, they go off the grid. Rachel moves into a rural cabin in the Ozark Mountains with her naively earnest boyfriend after reading a book called Toward Sustainability and flippantly declaring, “We are in the midst of a large scale ecological crisis.” When Rachel invites Chloe and Ellie to move into the cabin, they all believe that through communing with nature and disconnecting from the outside world, they will find themselves anew. 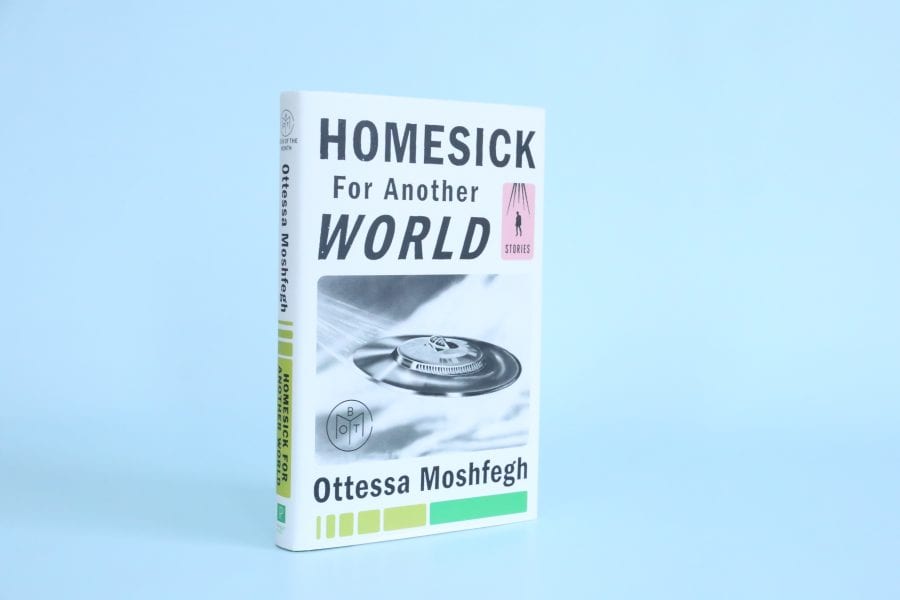 Homesick for Another World by Ottessa Moshfegh

Though I try to fight it, at heart I’m a New England prude. So by all rights Ottessa Moshfegh’s writing should make me deeply uncomfortable: In her story collection Homesick for Another World, Moshfegh writes of seedy loners and proud creeps, giving us brilliant insight into the inner lives of some seriously unpleasant people.

And uncomfortable it did make me, but 1) honestly, that’s a good thing, and 2) the other feeling I experienced alongside discomfort was pure freaking pleasure. It’s the pleasure you feel when you discover a genuinely special voice, when just a few sentences into a story you know you’re reading a writer who could never be mistaken for anyone else—a hilarious writer, a terrifying writer, a writer who’s keenly aware that the everyday is also the setting for the outrageous, the surreal. That’s Ottessa Moshfegh.

Even as the characters in Homesick for Another World repelled me, they drew me in. Though they are perverted, delusional, even sometimes hateful—you name it—it was not as a car-crash rubbernecker that I avidly read about them. Rather, by bringing us so deeply into her character’s heads, unfiltered and honest, yet in prose that is cool and clean, Moshfegh transmutes disgust into love, or, if not love exactly, the next best thing to love in fiction—understanding. Allowing these characters the gift of being seen clearly. 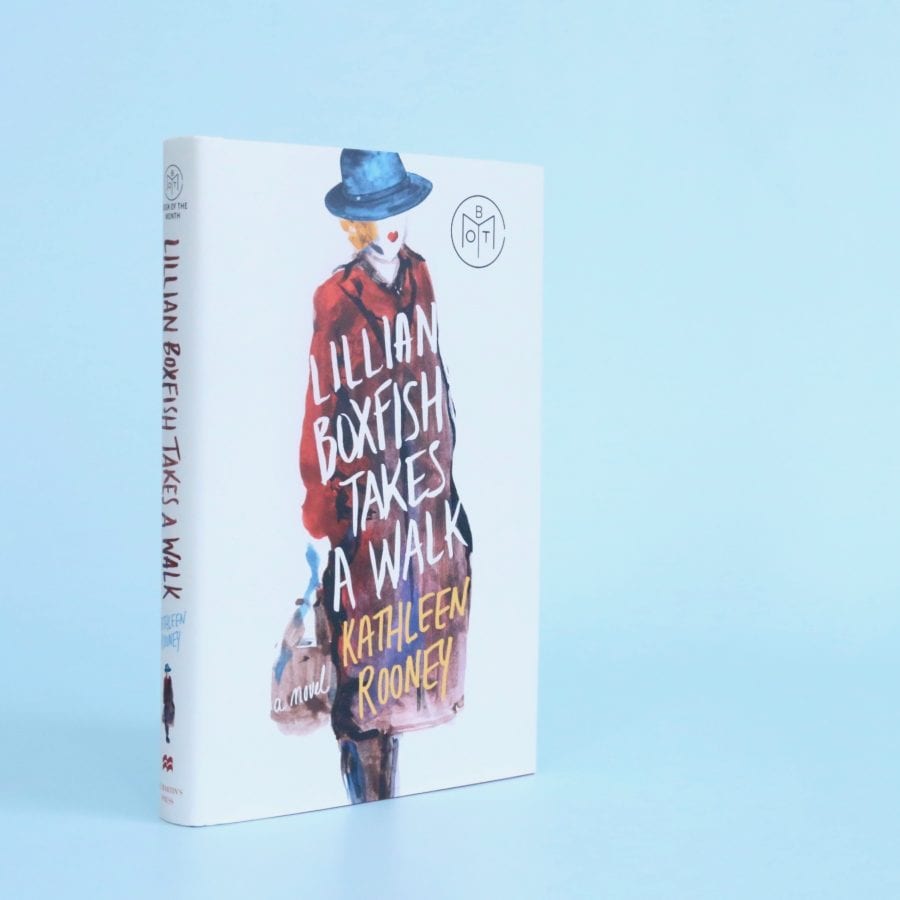 The perfect book to start a new year of reading and of living, both captivating and inspiring, this novel opens on the last day of 1984. Lillian Boxfish is 85 years old and on her own for New Year’s Eve, not for lack of invitations but because she prefers to celebrate and reminisce by herself.

We accompany Lillian on her evening’s peregrinations on foot up, down, and all across Manhattan– she is a devout walker – and back in time, as she remembers the main events of her life. With wisdom, humor, regret, and resolve, Lillian recounts a life well-lived across many decades, from her days in advertising through becoming a bestselling poet (back when such a thing was a possibility), and on to her love life, passionate but difficult. Hard lessons have been learned, but with knowledge comes acceptance and strength in equal measure.

Now, as she takes her New Year’s walk, Lillian is unsure how she can make the most of whatever time she has left. New York City seems on the edge, with incivility and vigilante justice on the rise, and the threat of AIDS pervading communities. Lillian’s past makes a compelling narrative but her future is less certain.

Lillian’s New Year’s Eve turns out to be not the solitary celebration she’d anticipated, but one filled with both ghosts from her past and wonderfully-alive unexpected companions she meets in the present. On the cusp of a new year and suddenly forced into making connections across generational and cultural lines, Lillian discovers she’s still as vibrant and hopeful and full of potential as the city she loves so much. Neither Lillian nor New York City are ready to call it quits, and the love she gives it and its crazy inhabitants ends up coming back two-fold and more. 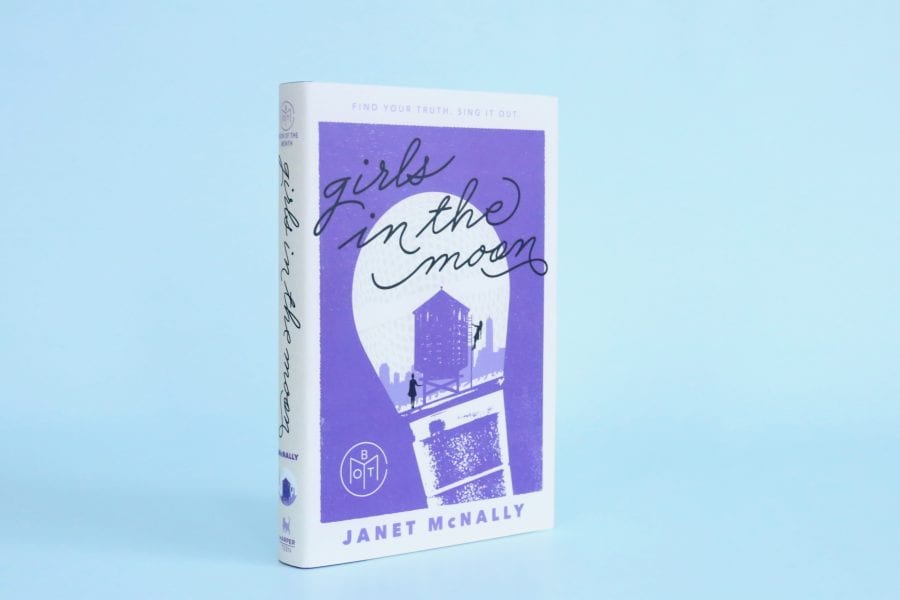 Girls on the Moon by Janet McNally

When I was growing up in my quiet, suburban nuclear family, I sometimes fantasized about what it would be like if my parents were famous. How easy and wonderful everything would be—definitely worth being named something silly like “Rocket” or “Pomegranate”—to live in a world where I am always recognized, where strangers regularly congratulate me on nothing in particular, where people are fascinated by me simply because the person making my lunch has been on the cover of a magazine.

Janet McNally takes the kernel of that fantasy, and blows it up into a million directions in Girls in the Moon. The novel follows the coming of age of Phoebe Ferris, the second daughter of former rock stars Meg and Kieran Ferris who, post-divorce and post-band breakup, have retreated into their individual lives: Meg as a single mother who eschews any mention of her rock star past and Kieran, still a musician, who hasn’t spoken to his daughters in years.

Now Phoebe is a senior in high school and trying to figure out if she has an identity of her own hidden somewhere beneath that of her icon parents and her cool, indie-darling older sister Luna, who lives in Brooklyn and dropped out of college to pursue her music career.

This month we have a really nice mixture of reads. There are two in particular that stand out to me – Lucky You by Erika Carter & The Most Dangerous Place on Earth by Lindsey Lee Johnson. Those will be the first ones I crack open, starting with The Most Dangerous Place on Earth. I will always and forever be intrigued by high school and the lives of teenagers. It appears as though it has a bit of a young adult vibe to it, and those are always my favourite reads. I think that’s why I loved the December Selection, You Will Know Me by Megan Abbott, so much. It was a little bit Young Adult, a little bit mystery and a little bit amazing. The thing I love most about Book of the Month is I am never without a book. I carry one with me at all times, and now when I have to wait for anything (Doctor’s Office, Car Wash, the BF) I just pull out my book instead of my Facebook app……….love it!