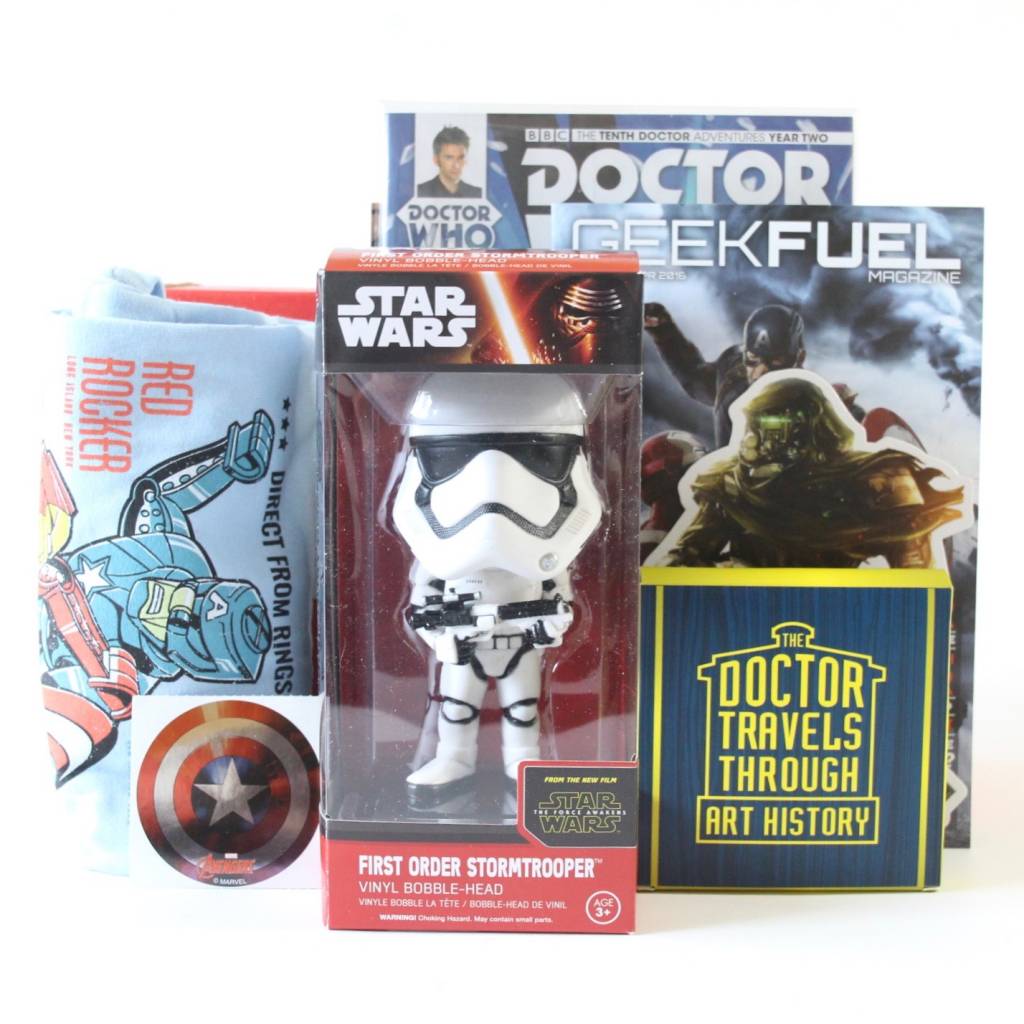 Geek Fuel Review April 2016 – I have to apologize for the late review. We are well in to June and I am just now getting around to doing my Geek Fuel Review for April 2016. I received both the May and April boxes at the same time, and thought the April box was the June box. In reality, I should have reviewed this one before reviewing the May box.

On a more positive note, I have to tell you how much I am enjoying this box. To be totally honest, I wasn’t expecting to like Geek Fuel at all. The geek/gamer subscription box thing is WAY over my head, and not something I can relate to. But, to my surprise, I really enjoyed the May box, and at first glance it appears as thought the same statement can be made for this one. Maybe I have the geek/gamer gene in me after all…. 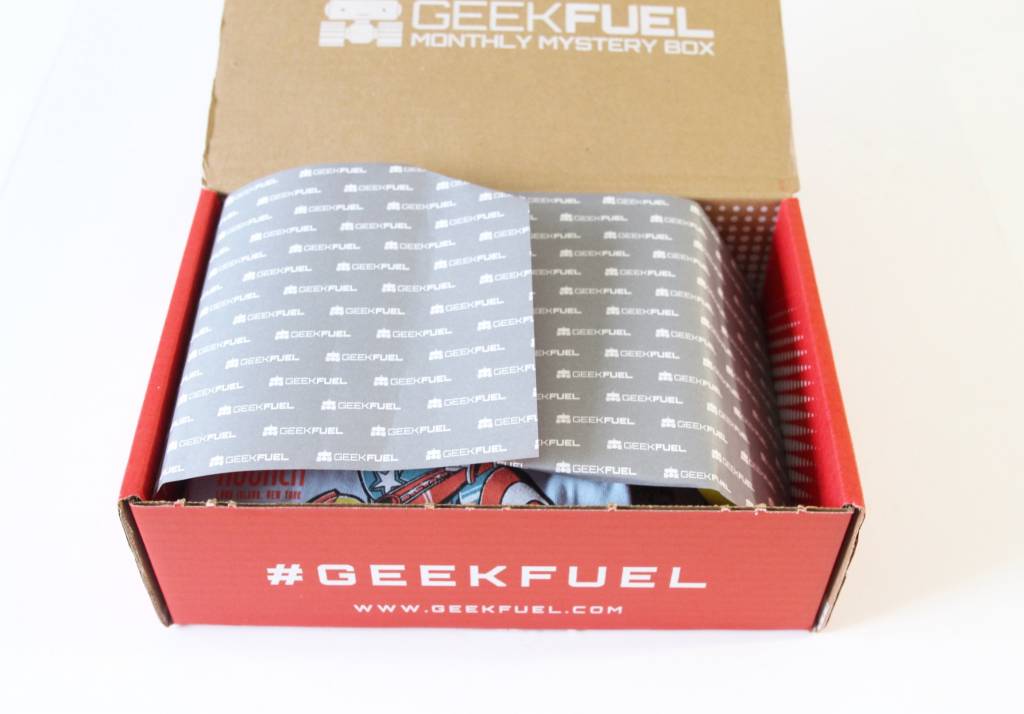 If you aren’t familiar with Geek Fuel it is a monthly mystery box of geeky goodness. Boxes will come packed with limited edition toys, collectibles, games, comics, stickers, buttons, and other fun stuff. While the contents vary by month, you will ALWAYS get an exclusive t-shirt and a full computer game (in the form of a Steam activation code) in your shipment.

What You Get: Your boxes will come packed with limited edition toys, collectibles, games, comics, stickers, buttons, and other fun stuff. While the contents vary by month, you will ALWAYS get an exclusive t-shirt and a full computer game (in the form of a Steam activation code) in your shipment. 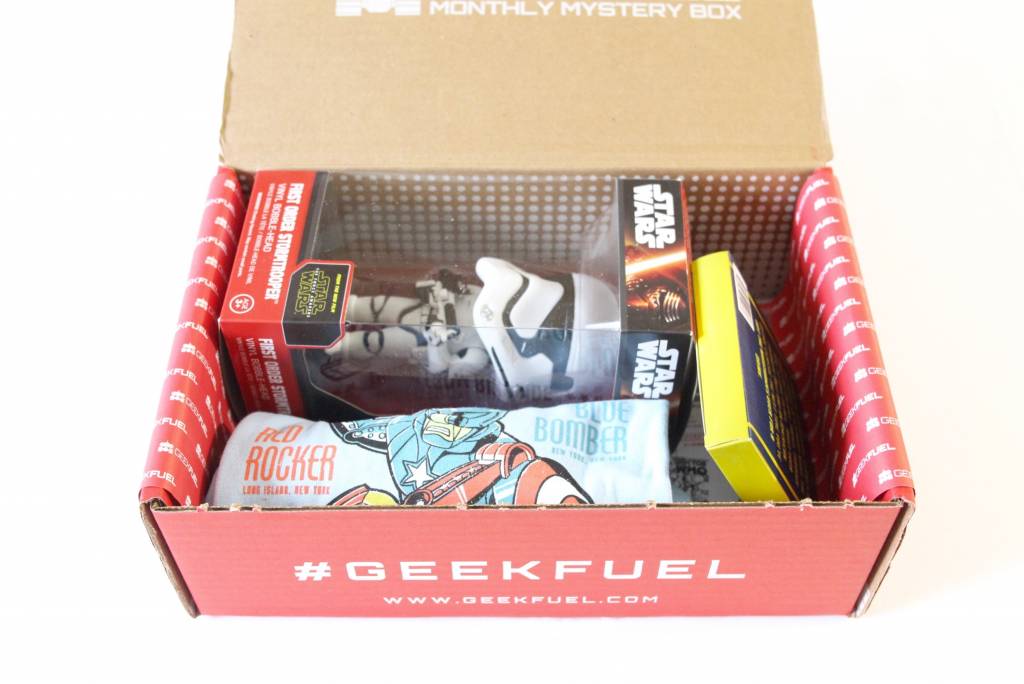 Each month Geek Fuel ships in a really cool red, logo’d box. I am all about the packaging when it comes to subscription boxes. This is one case where I judge a book by its cover, and Geek Fuel passes the test. Inside the box, everything is packaged nicely, which makes for a fun presentation.

Each box also comes with a product card detailing the items found inside. Thank god for this handy little card. If it wasn’t for the product descriptions, I would have no clue what half of the items are. 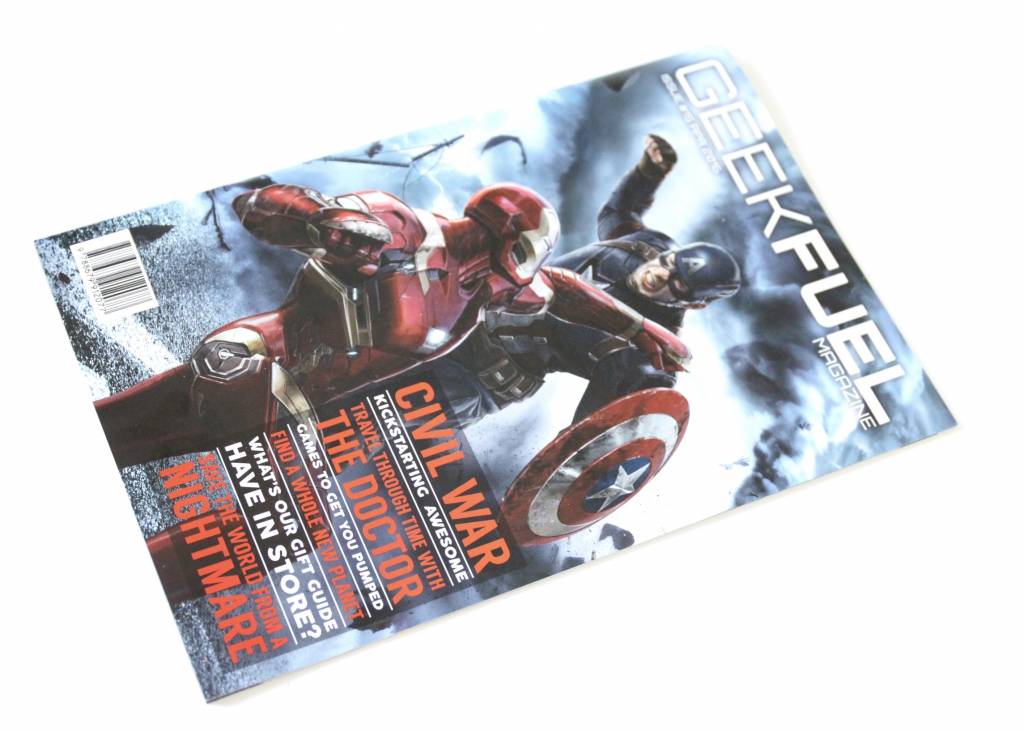 This handy little magazine is an item we find in every box. If I would have paid more attention to it in the first place, I would have known this was the April box. It says the month/year right at the top. This month’s magazine seems to be dedicated to Captain America. I am wondering if they feature a movie/game in every box, depending on what’s coming out at the time. The BF has been dragging me to all the Marvel/DC movies lately, so this magazine will prove to be extremely useful. It also contains things such as Cosplayer of the Month, Gamer Reviews, a Gift Guide, Unboxing Video spotlights, etc. 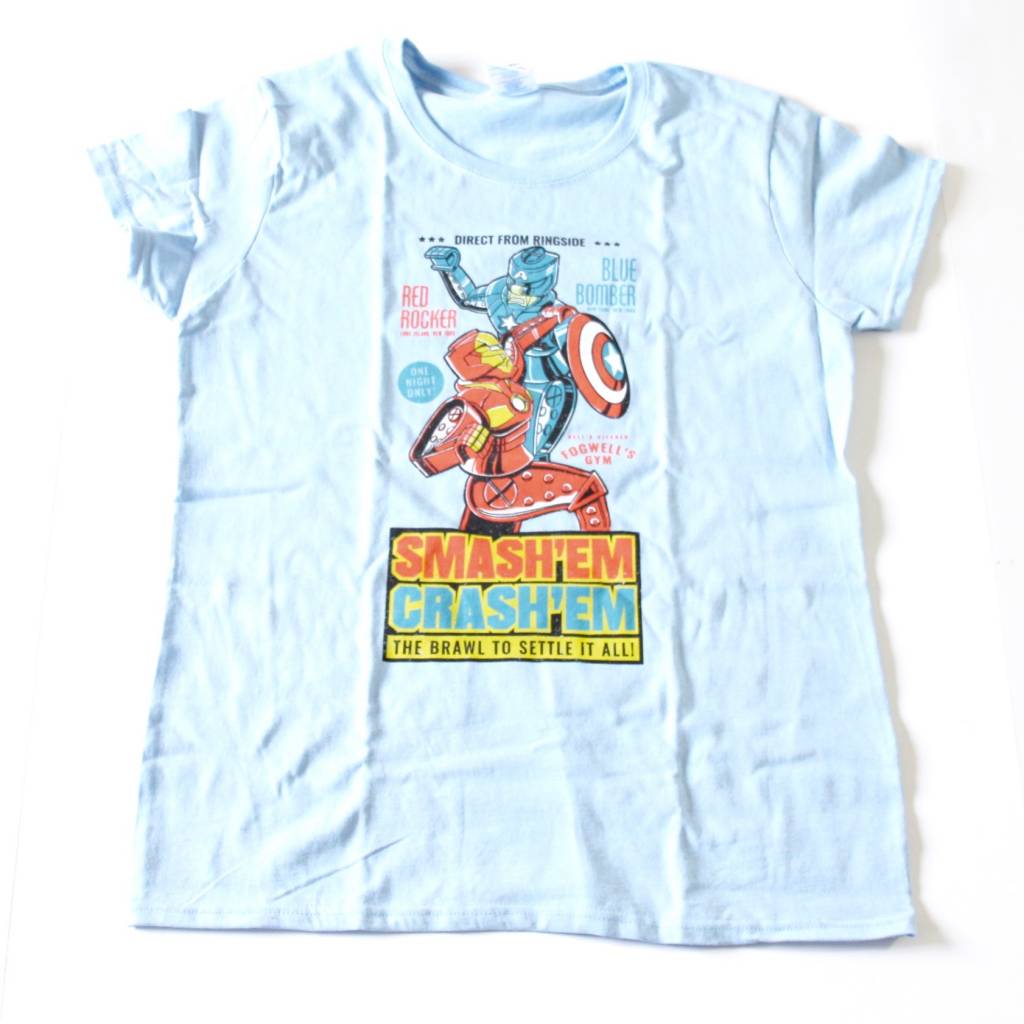 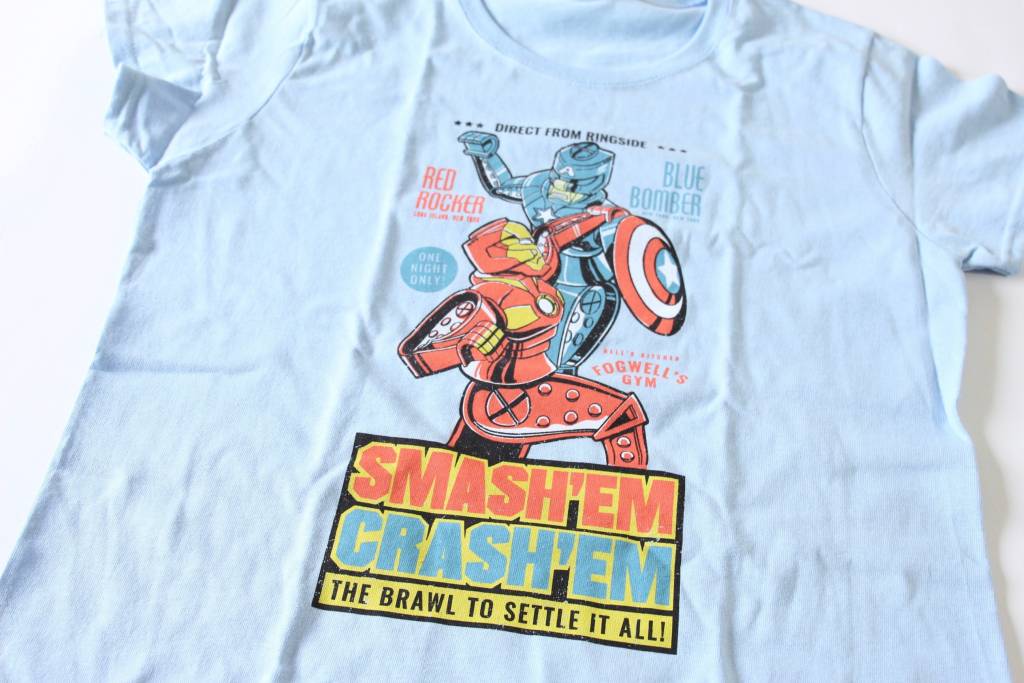 Each box includes a Geek Fuel exclusive t-shirt. This month they are sticking with the captain America theme and I actually really like it. They have been sending me mediums and I really need to update that to size small, so I can wear them.

Who’s head will come clean off their neck first? Only an epic battle will tell. It’s the Stars and Stripes, hailing from the lower East Side in one corner and the Crimson Dynamo, hailing from Long Island, in the other. Gentleman: Fight! 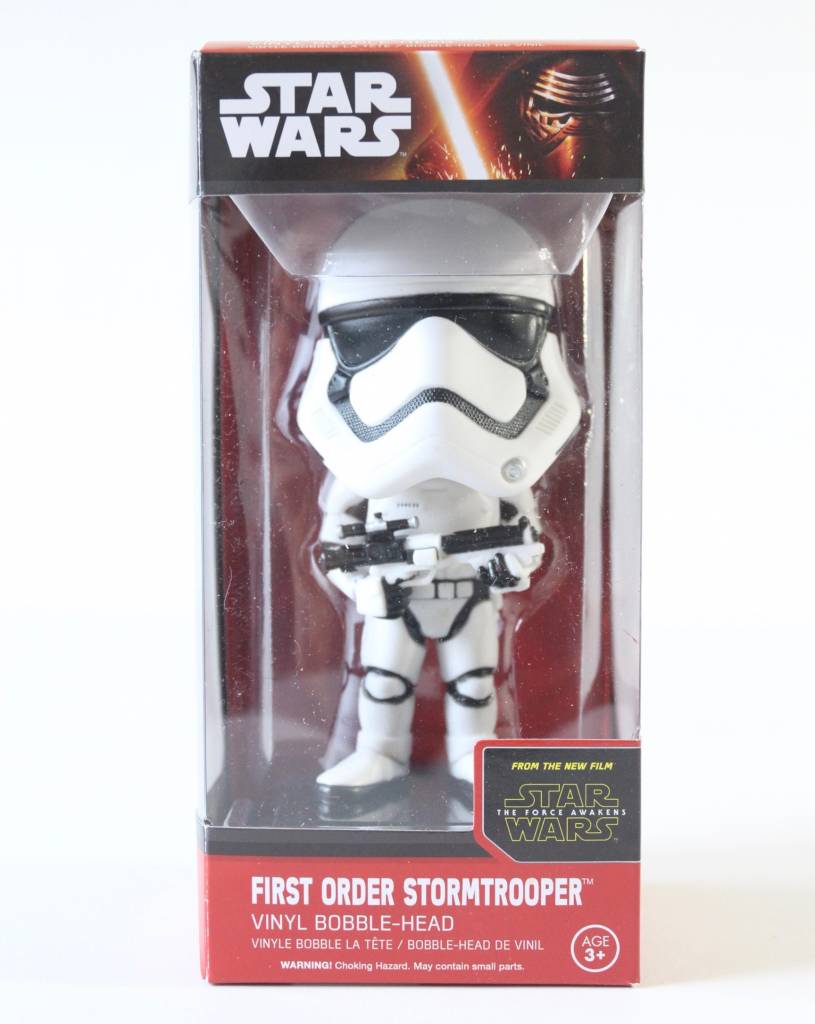 I LOVE bobbleheads! I wonder if they include these often? I kind of want to start a bobblehead collection…..and part of me doesn’t believe those words actually came out of my mouth.

With allegiances to Snoke and plans to reclaim their imperial legacy, these little bobbleheads have been plotting for years. They just might use your desk as their stage. 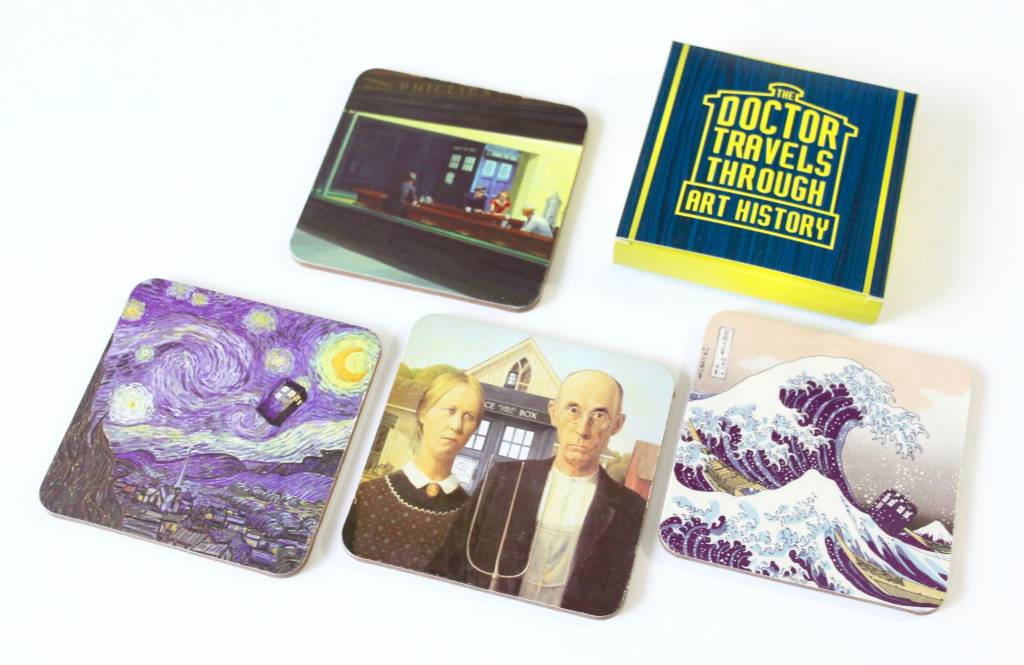 These are actually really cool. I am finding myself pleasantly surprise with most of the items in the April box. They don’t really fit my current decor (being sarcastic there) but I still might use them.

Sip on a cocktail and take a trip through time with the good doctor when you use these coasters. Each one features the famous time-travel machine in a piece of history’s art. 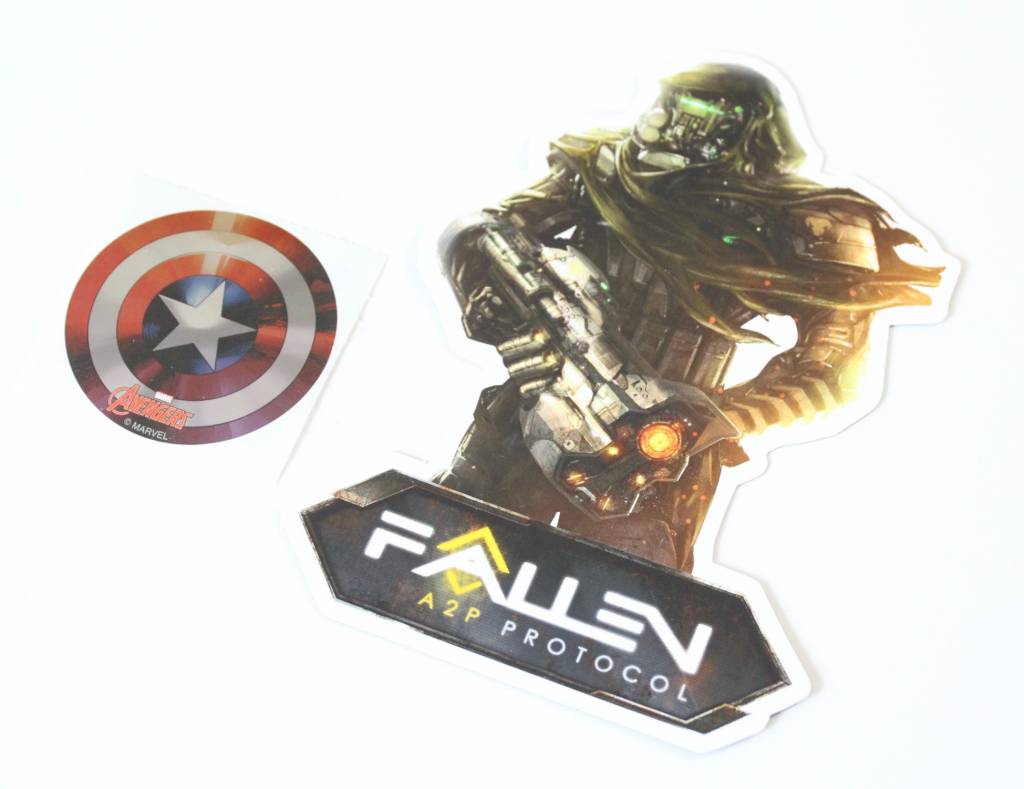 This is one item I can’t really give my opinion on, as it is completely over my head. Subscribers receive a downloadable game in every box, which is a really cool feature if you ask me.

Take a journey through the post-apocalyptic world with this turn-based tactical strategy game in a quest for revenge and a search for the truth in how the world came to be. 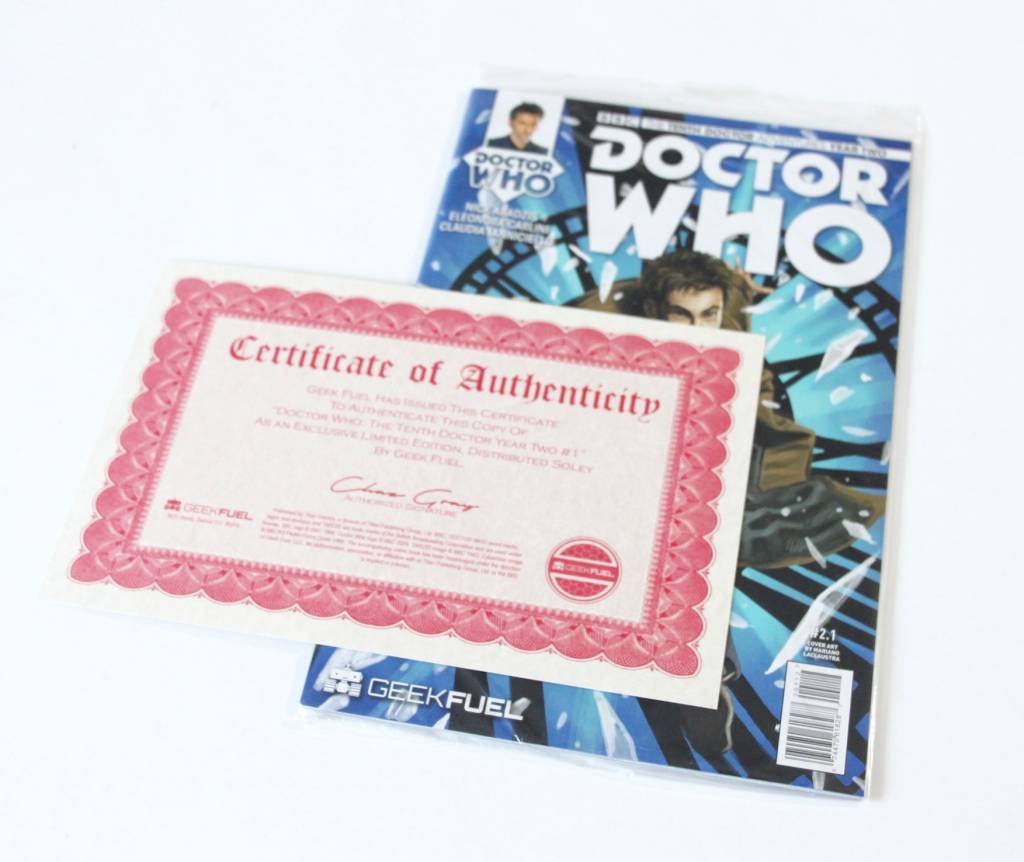 Doctor Who: The Tenth Doctor Year 2 #1

This bad boy comes with its own Certificate of Authenticity! I’m not familiar with Doctor Who, and feel bad saying that, because I know I should be.

This exclusive licensed comic book puts all of the BBC’s Doctor Who action right in your hands to peruse at your leisure. 1,500 of you will get the super limited variant cover too!

I have to say it, I really like what Geek Fuel has going on. They put together a really great box, which should say a lot coming from me, as this subscription category is not my “preferred” category. I like the consistency of this box, as it lets me know what to expect going forward. I know that each box will contain a detailed product card, a mini magazine and an exclusive t-shirt. There’s something to be said about a consistent box. I like the surprise element (which we clearly get here) but I also like the fact that we get the same kind of items every month. It’s the best of both worlds. Geek Fuel is a frontrunner in the Geek/Gamer subscription box category….in my personal opinion. 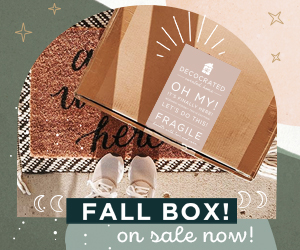 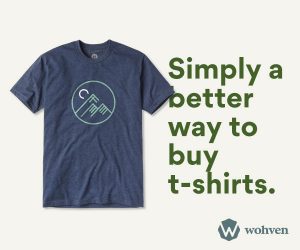 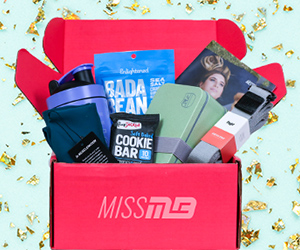 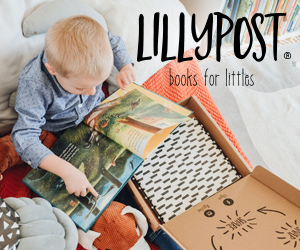