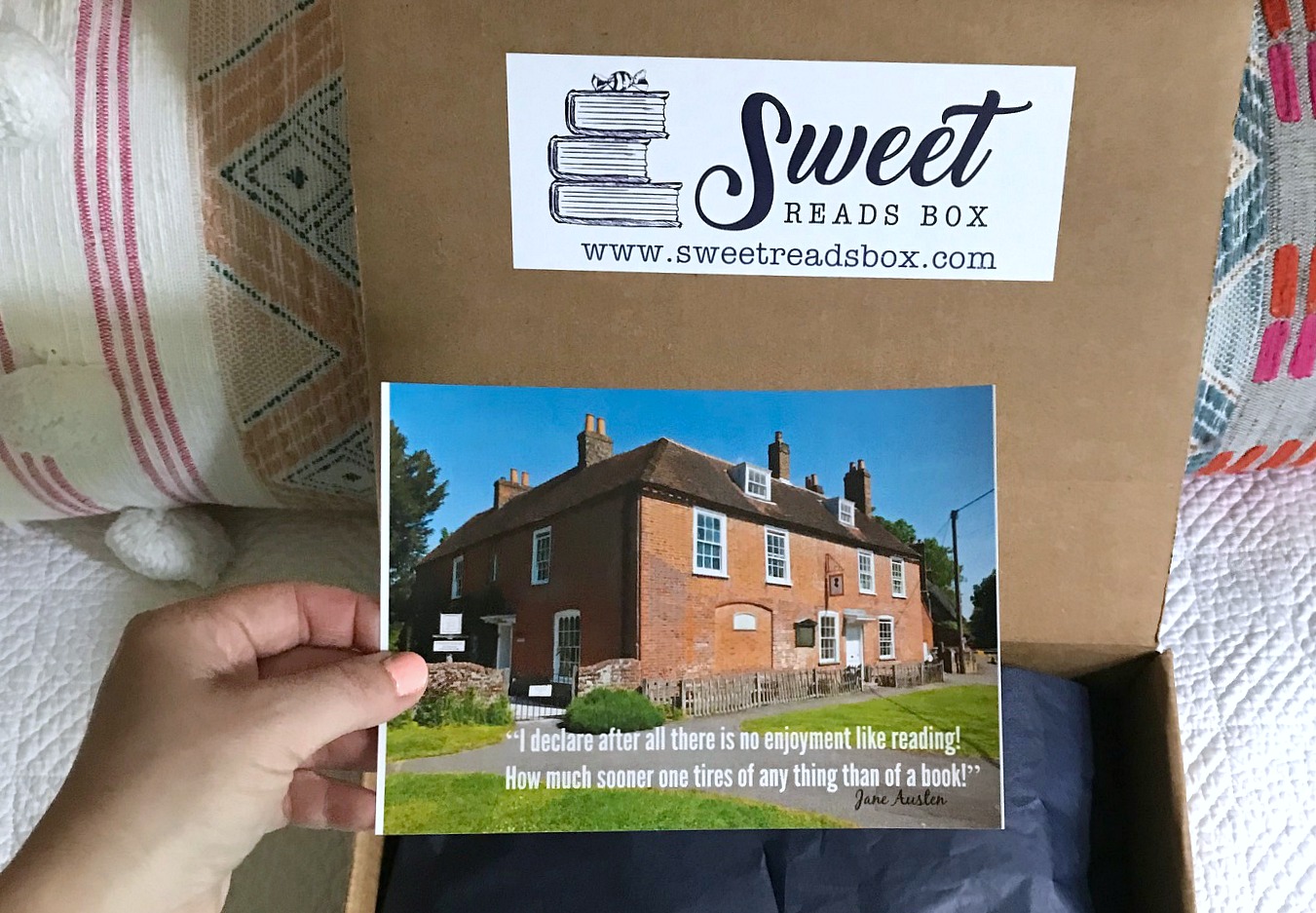 “I declare after all there is no enjoyment like reading! How much sooner one tires of any thing than of a book!” — Jane Austen

Hello hello! How’s your summer reading going? I’ve been up late the past few nights with The Boyfriend Project by Farrah Rochon and ah, so fun! It’s been a while since I got lost in a novel (too tired/distracted/restless, all the things) and I’ve really missed it. Jane Austen was right — reading is the shiz! One of my favourite ways to enjoy some “me time”. Which brings us to June’s Sweet Reads Box aka “me time” delivered. The monthly subscription service includes a new novel + something to eat and drink + some bookish goodies tied to the story and June’s is perfect for Jane Austen fans and the Jane-curious. Are we excited to see inside? *

* They kindly sent us this box for review

The first thing you see when you open a Sweet Reads Box is the product card. One side has a quote related to the novel or the theme of the box and the other side a description of the contents. I like to be surprised so I always save the card for last. (If you’re a subscriber, do you do that too?) 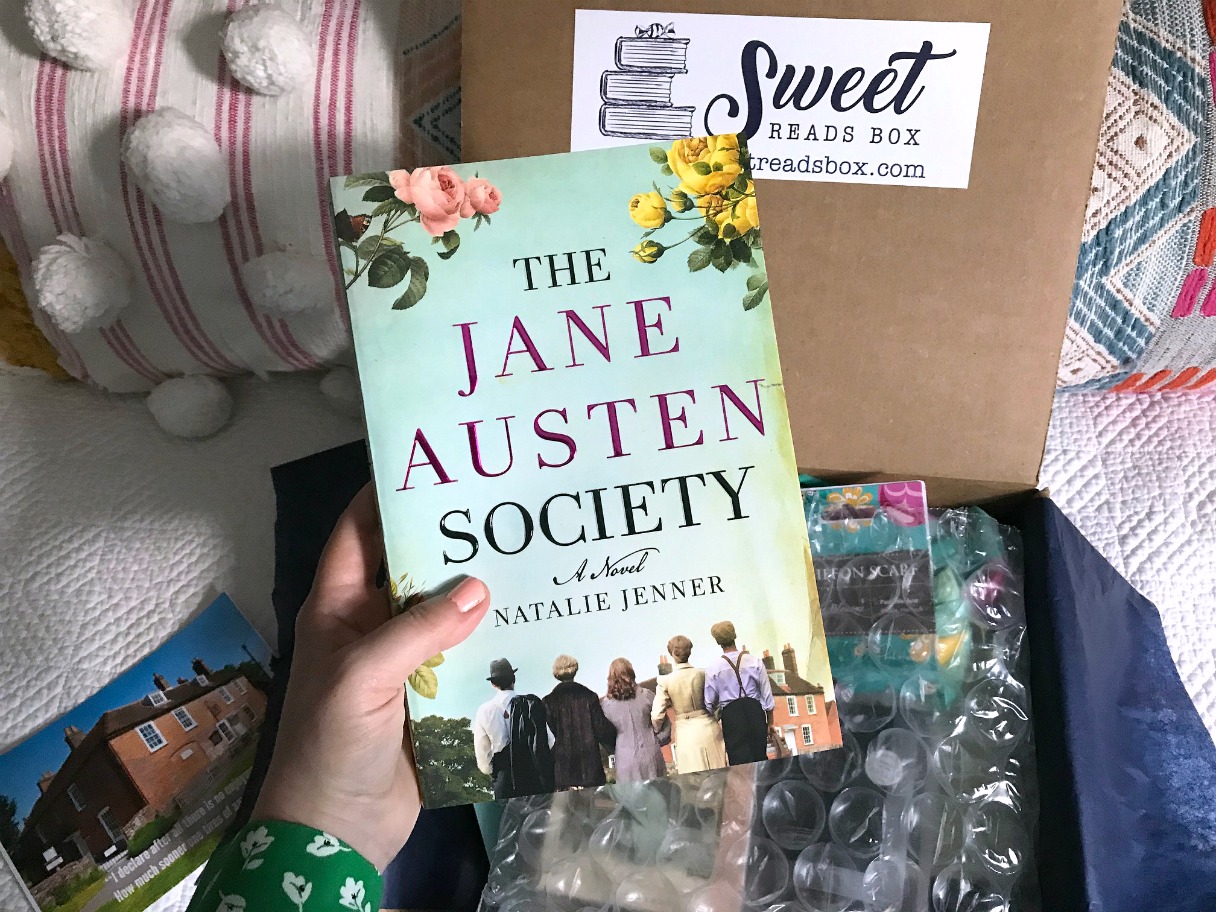 The book is always my favourite part of the box but it’s not usually on top so I dig it out. For June we’ve got the brand-new release, The Jane Austen Society by Canadian author Natalie Jenner. Here’s the description from the publisher:

“Just after the Second World War, in the small English village of Chawton, an unusual but like-minded group of people band together to attempt something remarkable.

One hundred and fifty years ago, Chawton was the final home of Jane Austen, one of England’s finest novelists. Now it’s home to a few distant relatives and their diminishing estate. With the last bit of Austen’s legacy threatened, a group of disparate individuals come together to preserve both Jane Austen’s home and her legacy. These people – a laborer, a young widow, the local doctor, and a movie star, among others – could not be more different and yet they are united in their love for the works and words of Austen. As each of them endures their own quiet struggle with loss and trauma, some from the recent war, others from more distant tragedies, they rally together to create the Jane Austen Society.

A powerful and moving novel that explores the tragedies and triumphs of life, both large and small, and the universal humanity in us all, Natalie Jenner’s The Jane Austen Society is destined to resonate with readers for years to come.”

I don’t know much about Jane Austen’s life or works apart from reading Pride and Prejudice years ago but this book sounds excellent and I’m curious to learn more. What about you? Is it something you’d like to read? 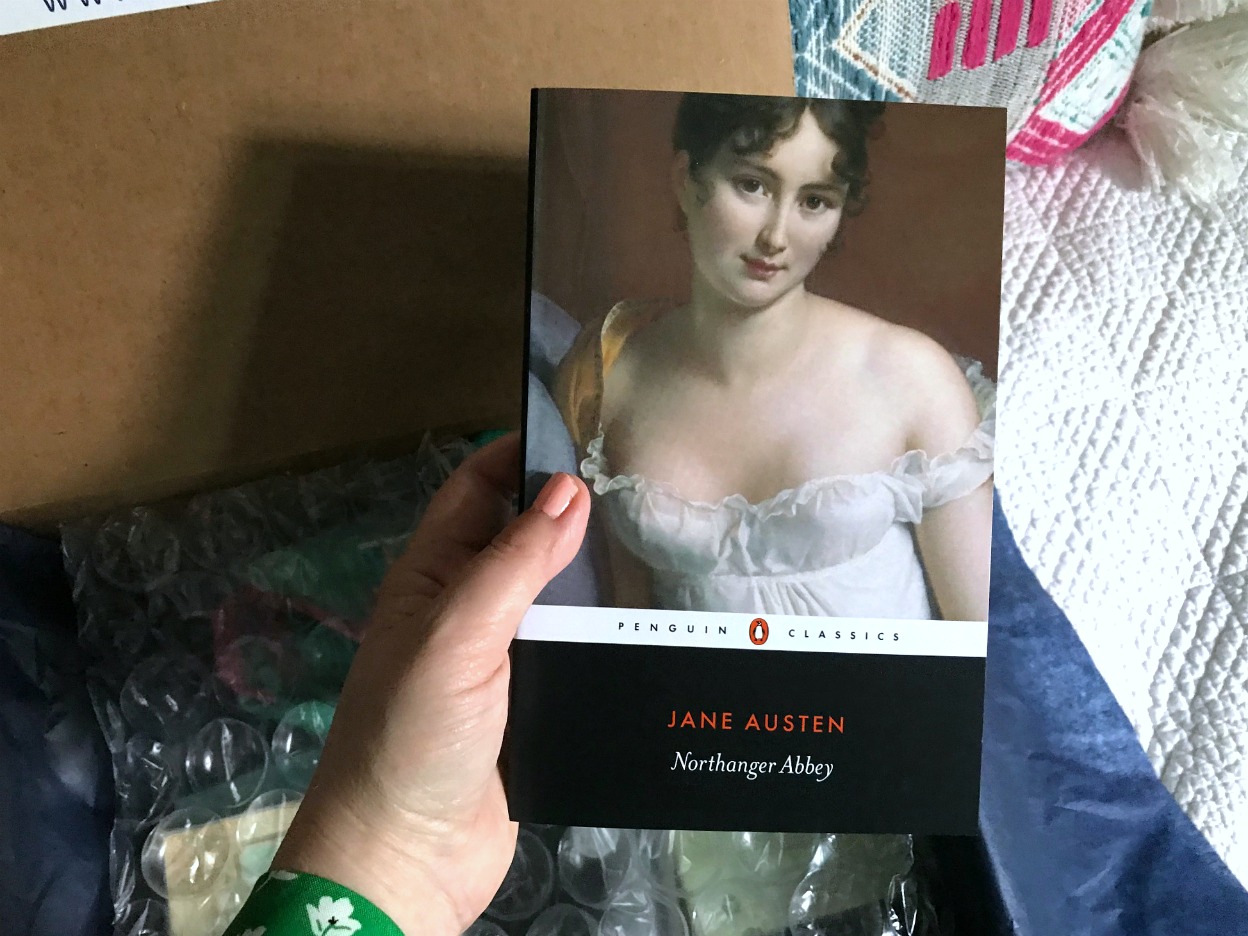 And a second book!! Woohoo!! I feel like I’ve won the lottery!! It’s Northanger Abbey by Jane Austen. I’ve never heard of it, let alone read it. Here’s the synopsis:

“Northanger Abbey is both a perfectly aimed literary parody and a withering satire of the commercial aspects of marriage among the English gentry at the turn of the nineteenth century. But most of all, it is the story of the initiation into life of its naïve but sweetly appealing heroine, Catherine Morland, a willing victim of the contemporary craze for Gothic literature who is determined to see herself as the heroine of a dark and thrilling romance.
When Catherine is invited to Northanger Abbey, the grand though forbidding ancestral seat of her suitor, Henry Tilney, she finds herself embroiled in a real drama of misapprehension, mistreatment, and mortification, until common sense and humor—and a crucial clarification of Catherine’s financial status—puts all to right. Written in 1798 but not published until after Austen’s death in 1817, Northanger Abbey is characteristically clearheaded and strong, and infinitely subtle in its comedy.” 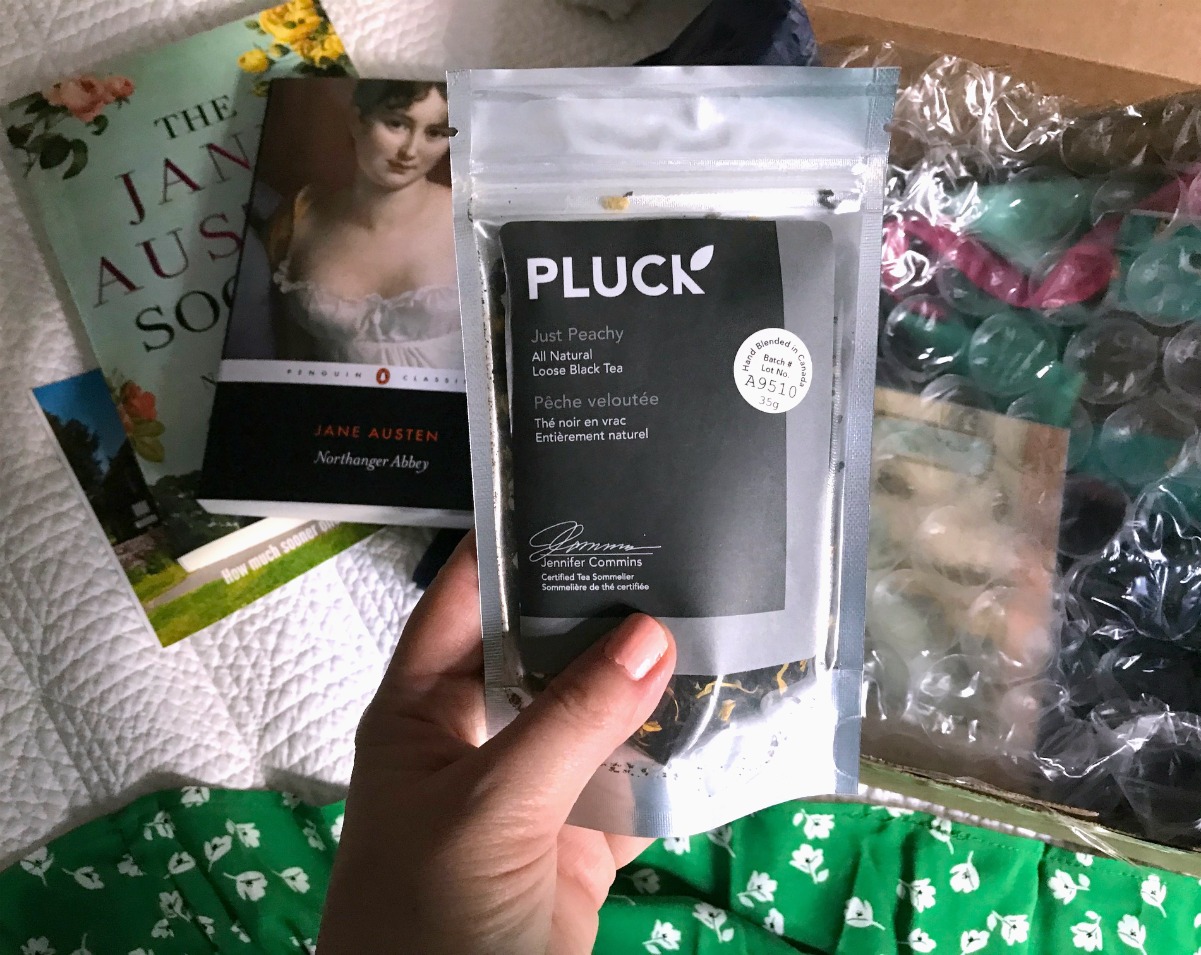 “Bursting with summer flavours, this tea is delicious iced or hot.”

My hubby and I have both made this tea a few times and keep a large mason jar of it in the fridge to enjoy any time. Love the peach flavour! Very refreshing. 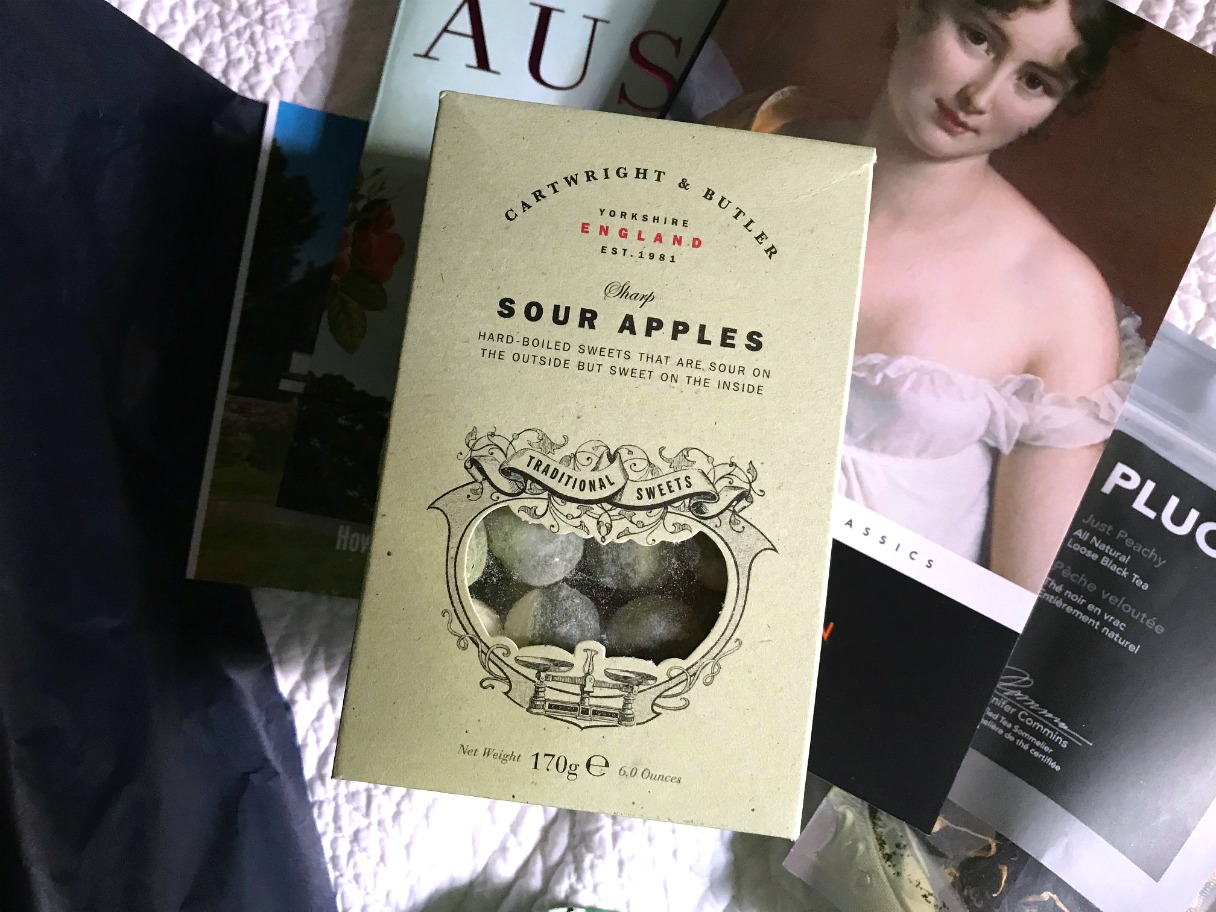 “A delicious variety of summer flavours to enjoy while reading.”

Oooh I love a hard candy but pretty much anything except apple (or black licorice flavour, but that goes without saying). I’ll find these sharp sour apple candies a good home. 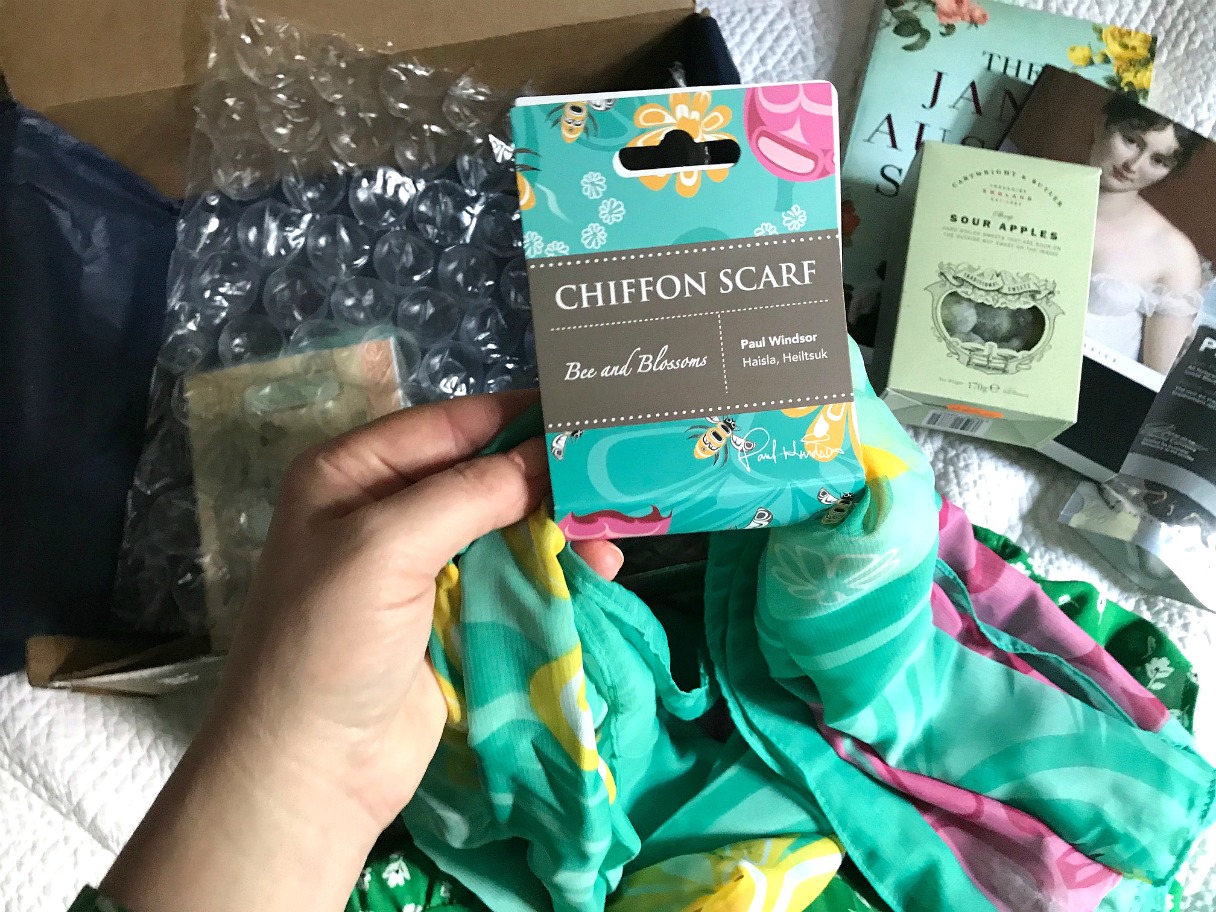 “Reminiscent of a British garden, this scarf brings an element of summer to your wardrobe. A beautiful design created by a Canadian Indigenous artist.”

I saw a different scarf in another June Sweet Reads Box and it was really nice too. Pretty design, and I love that it’s created by an Indigenous artist. 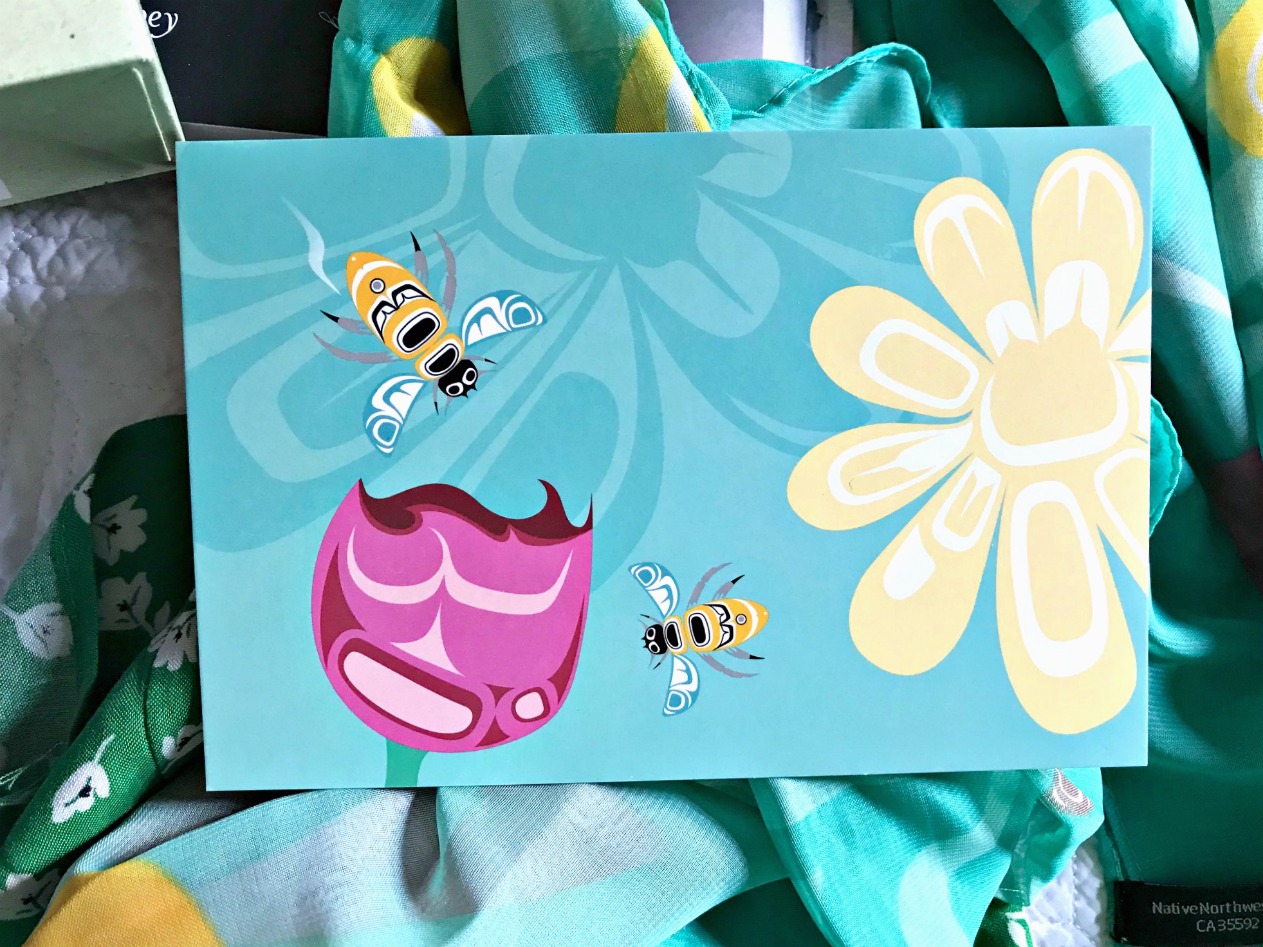 “A complement to your scarf, this postcard is great framed, used as a bookmark or sent to a friend.”

What a great idea! I love how the postcard is the same print as the scarf and something you can use in a variety of ways. I’m going to mail mine to a friend. 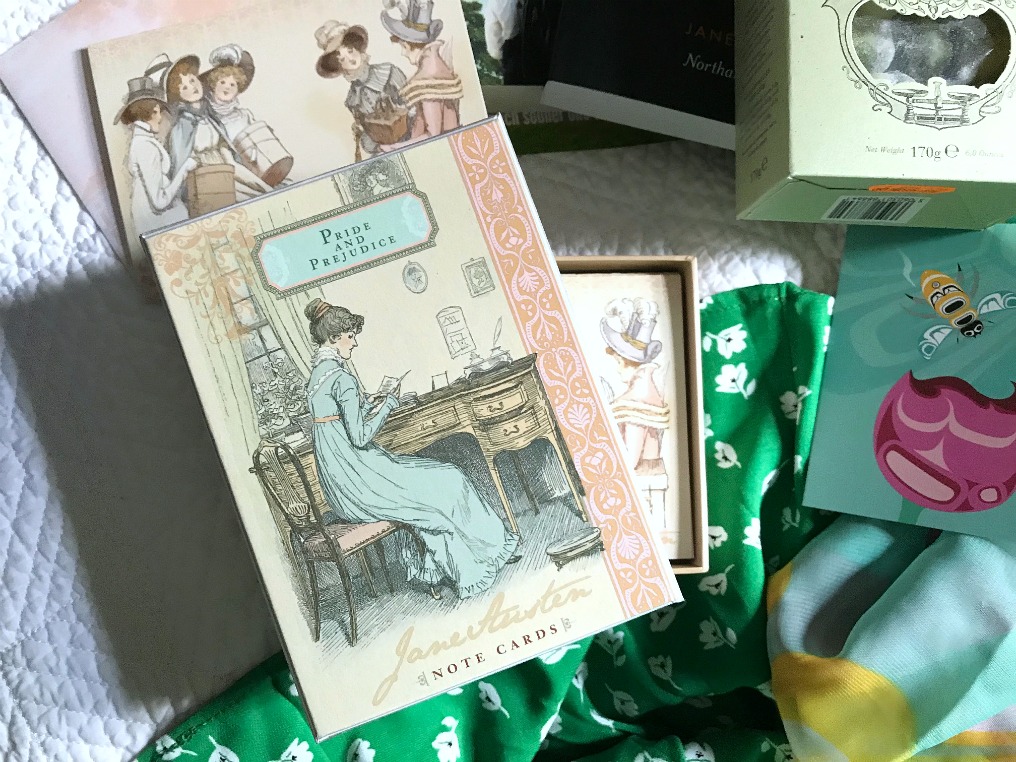 “What better way to stay connected with friends and family in a time of physical distance? Use these notecards to pen a note to someone you are missing. We think you will want to tell everyone about this novel.”

My bestie and I have been sending cards to each other the past few months and she loves Jane Austen so these are perfect! Another great idea! 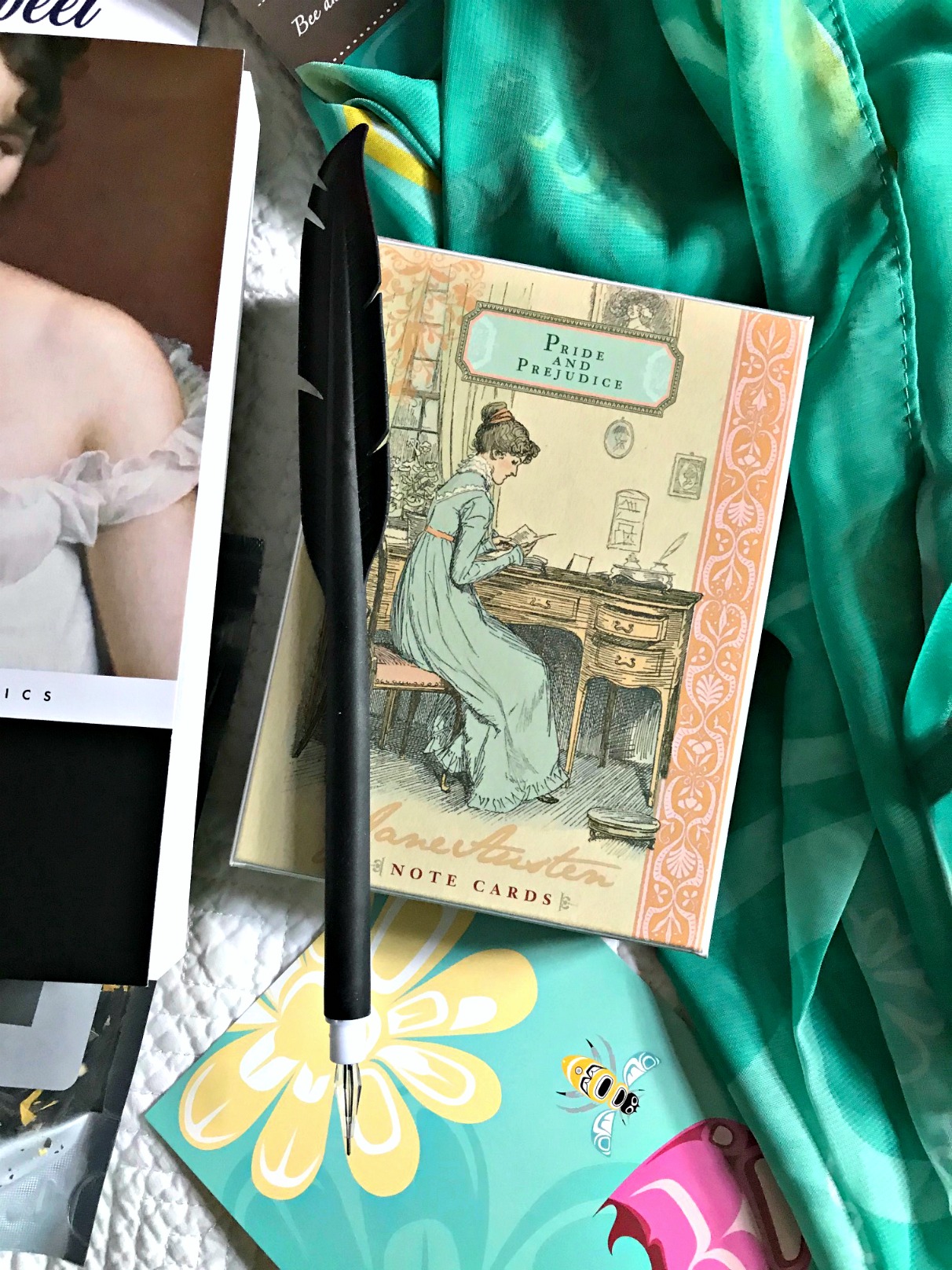 “Dreaming of the days of inkwells and feather quills? Scribe your own masterpiece with this feather pen without fear of ink-stained hands.”

Okay how much fun is this? I feel like my bestie is going to need one of these too so I’ll have to search them out. It writes really smoothly and feels like a touch of fancy. I’m into it! 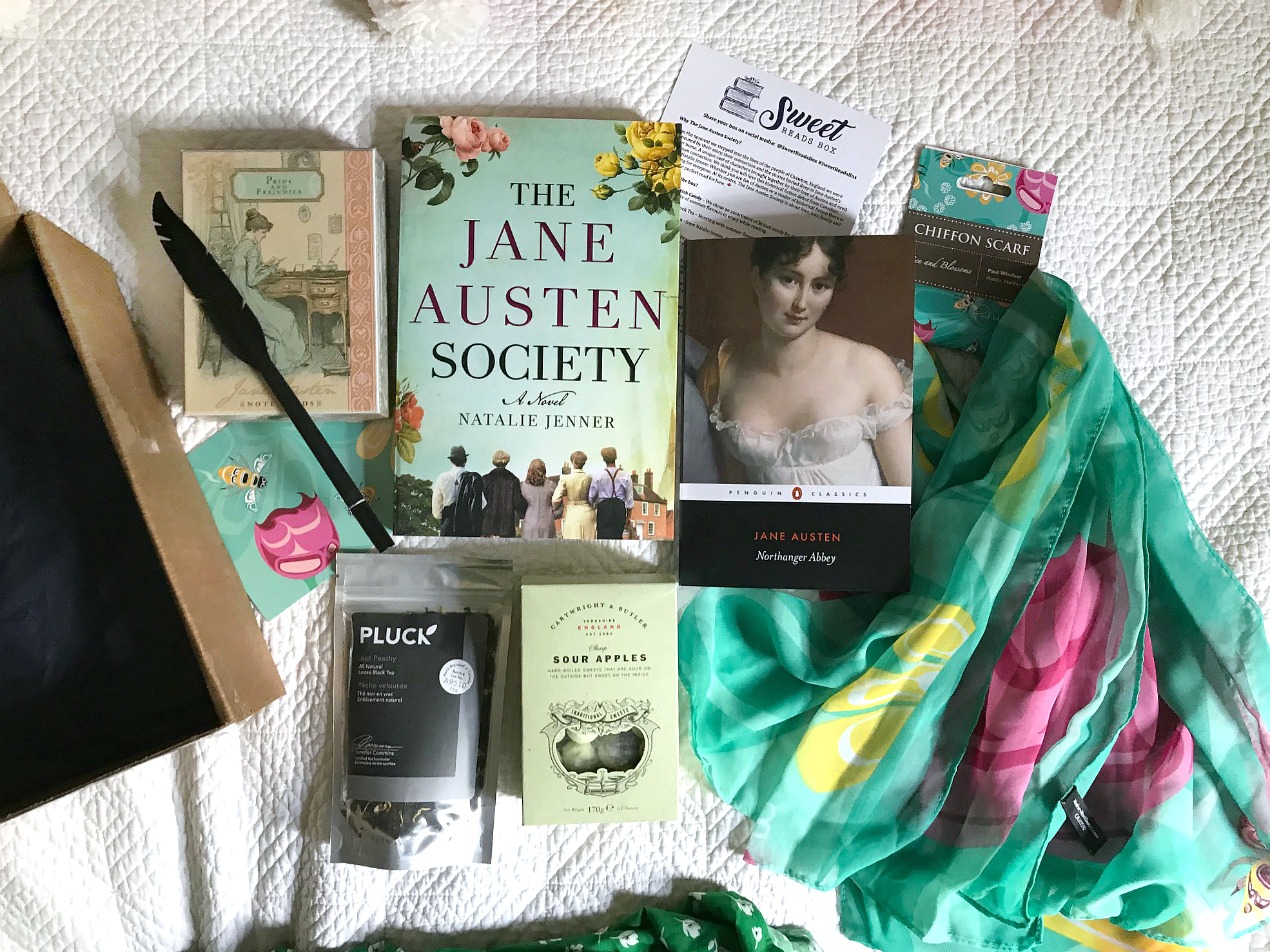 I forgot to include it here, but there’s also a signed bookplate from The Jane Austen Society author, Natalie Jenner. Sweet Reads Box has been including these more and more and I love the personal touch!

How much do we love June’s Sweet Reads Box? I only wish there were more of these for sale because I know some of you are going to want one. They get snapped up so quickly! July’s box is already sold out but I think you may still be able to get one of the last August boxes. (Sweet Reads Box ships Canada-wide.)

Stay tuned because I’ve got another Sweet Reads Box coming up that I think you’re going to love, the Limited Edition Beach Read Box!